The 'Someone Like You' singer also scooped the Best Original Song prize for the track at the Academy Awards last night.

The 'Chasing Pavements' star took part in a special tribute segment of the show dedicated to the 007 franchise.

The British singer wowed in a sparkly black and gold Burberry dress as she took to the stage for the powerful and emotional rendition of the track.

Oscar winning actress Jennifer Lawrence introduced the star on stage calling the track "irresistible," adding that it "has joined the canon of great James Bond music."

Shirley Bassey also performed her famous James Bond theme 'Goldfinger' during the ceremony, although the pair took to the stage separately despite earlier rumours of a duet. 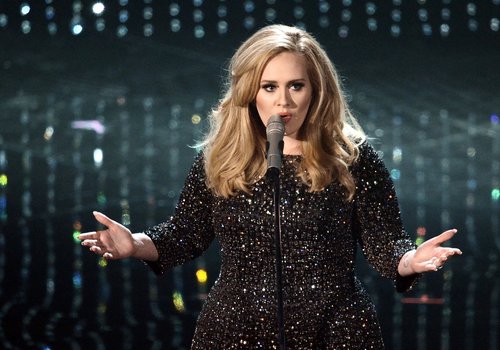 A silhouette of the singer fell on the stage with a single white light beaming down as she ended the performance with a triumphant and soaring vocal.

Watch Adele performing 'Skfall' at the Oscars 2013 below:

Later in the night, Adele picked up the Academy Award for Best Original Song at the ceremony.

She fought back the tears collecting the prize alongside producer and longtime collaborate Paul Epworth.

The UK star also thanked her boyfriend Simon Konecki during her speech.

The big winner of the night was Ben Affleck as Argo scooped the Best Picture prize.