"No Naked Harry Styles!" The 5SOS Boys Are A Tad Disappointed At Their Latest Tour Slot 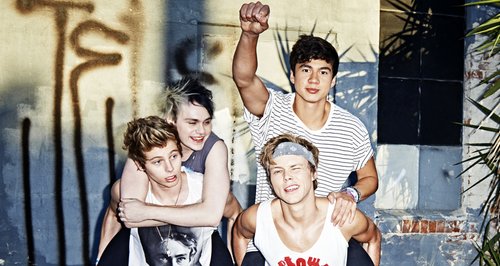 The 'Don't Stop' four-piece also reveal whether that fan dream of a 1D team-up could ever happen.

The 5SOS boys are a bit disappointed at their 1D pals out on tour… because (brace yourselves)… Harry HASN'T been stripping off this time!

The Aussie four-piece joined One Direction on the road last year, and relayed some terrifyingly sordid tales of naked fruit throwing after their 1D experience.

However, Ashton, Luke, Calum and Michael have revealed that after joining 1D again, as the support act for the 'Where We Are' tour, it's a more mature affair this time around.

"No naked Harry Styles, which is disappointing!" Ashton told MTV News this week, fresh from their latest supporting slot with the 1D boys. "It's a decrease of nudity on the tour this year.

But despite the two INCREDIBLY popular boy bands being good pals and hitting the road together, don't expect a team-up between them anytime soon. #SadFace.

"We are two completely different bands," bassist Calum Hood explained, while Luke gave fans a SMALL glimmer of hope by adding: "We might write with them at some point.

"If we were going to do a song it'd be with someone that's cool and up-and-coming."

> Remember 5SOS Hit The Road In The UK Next Year… and Tickets Are On Sale NOW!