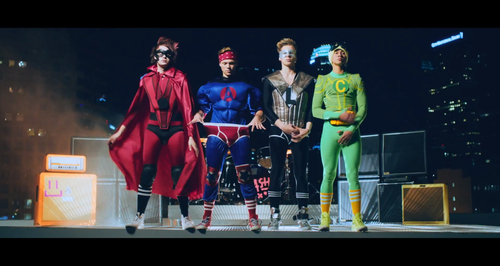 The 'Don't Stop' band have been terrorising crew backstage by hitting them with a piece of fruit.

5 Seconds Of Summer went rogue on the 'Where We Are' UK tour this week by going round attacking One Direction stars and crew members with a banana.

The 5SOS boys have been posting up Instagram videos of themselves carrying a banana around backstage, with an angry face painted on it, while they sneak up behind people and slap them around the face with the fruit.

An unknown member of the 'She Looks So Perfect' four-piece is seen filming the rogue banana as they go around hitting crew members with it, including One Direction star Niall Horan in one of the clips.

5 Seconds Of Summer are currently supporting One Direction on the UK leg of their 'Where We Are' stadium tour.