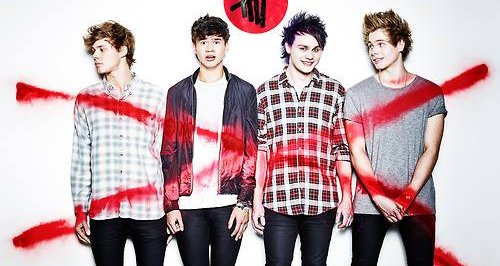 The 'Don't Stop' band reveal details about their upcoming album and unveil a new track.

5 Seconds Of Summer have revealed the tracklist for their 2014 debut album as well as premiering a brand new song.

The Australian band will release their eponymous debut '5 Seconds Of Summer' on June 30.

Fans who pre-order the album from today (14th May) will instantly receive a brand new track from the group called 'Good Girls'.

Song titles on the 16-track deluxe edition of the collection - which appear in full below - include 'Kiss Me Kiss Me', '18', 'Everything I Didn't Say' and 'Beside You' as well as their recent hit single 'She Looks So Perfect' and upcoming release 'Don't Stop'.

Fans rejoiced on Twitter about the news, revealing their excitement that the group are finally putting out a record using the hashtag #FinallyA5SOSAlbum.

I never thought this day would come then my reaction was kind #FinallyA5sosAlbum pic.twitter.com/DxhluUcjd4

"there are old songs on the album - beside you, heartbreak girl, voodoo doll, green light, 18" Me: cries in corner #FinallyA5sosAlbum

accurate description of what is happening and what will happen after the release. #FinallyA5sosAlbum pic.twitter.com/mwAtA5wqCL

Meanwhile, the band continue to tease the superhero-themed music video for 'Don't Stop', with the latest image revealing Luke Hemmings as Dr Fluke. The clip will premiere in full on 19th May at 7am.

DOCTOR FLUKE. #DONTSTOPMUSICVIDEO coming to a screen near you, May 19 @ 7am GMT / 4pm AEST. #5sosDRFLUKE pic.twitter.com/c8fHeLE4lI