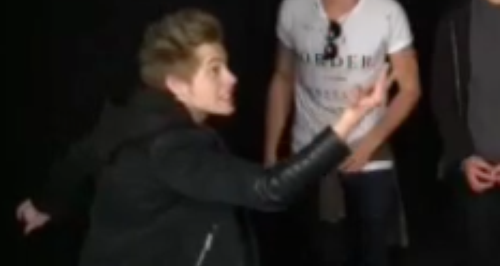 Oh Luke Hemmings you sassy sasspot. We like these Vines of you A LOT!

Luke Hemmings from 5 Seconds Of Summer is pretty awesome. Like, look at his beautiful face and his lip ring - to die for. There are obviously far too many reasons why Luke is awesome to fit on one page, but here are our pick of the top 14 in the form of Vines.

Just IMAGINE watching 'Mean Girls' - aka the best chick flick of all time - with super-hotty Luke Hemmings AND he isn't even moaning about it or trying to put the football on instead. Heaven.

2. He has Spongebob sad pants

We all have our fave pair of comfy undercrackers for those down days. Luke's ones have Spongebob on them.

3. There's Luke the rock star and then there's the real deal

We like our men to have many sides to them. Luke the rock star from 5SOS is totally different from the Luke he is behind closed doors. We're not sure which we prefer…

4. He's totally OK with people sneaking in to his gigs

Can't afford a ticket or they're all sold out? Luke's totally cool with you sneaking your way in, FYI.

5. He moonlights as Spiderman

Now just imagine him in that skin-tight lycra bodysuit… *drools*

Because when you think of essential life skills, being able to eat a banana on the loo is pretty high up the list. Ahem…

7. He's SUPER passionate about his hobbies

If you don't like FIFA, you'd probably better start getting into it…

8. His laugh is also pretty awesome

Have you ever heard a more magical laugh come out of a real human man? We haven't.

We'd come to your aerobics classes Luke. Not sure how much good the exercise is but the view is FANTASTIC.

10. He's got another secret career as a sassy Disney sasspot

11. He looks all kinds of fine in a snapback

You know you're amazing looking when you genuinely have hat dilemmas because both hat and no hat look equally good.

12. He even makes a sombrero look good

Not the easiest item of clothing to look anything less than hilarious in, but weirdly we still fancy him.

You go, Luke Hemmo. Do your awesome thing.

If you liked these Vines of Luke, check out why we love Calum Hood from 5SOS right here. You're welcome!