5 Seconds Of Summer: The 'She Looks So Perfect' Singers 12 MUST-SEE GIFs' 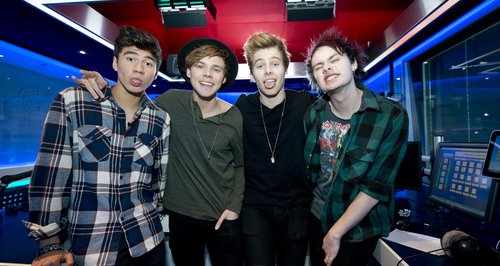 Feast your eyes on some looping wonderful moments from Ashton, Luke, Calum and Michael.

They're one of 2014's biggest acts and show no signs of stopping any-time soon. 5 Seconds Of Summer tore through the pop world with their HUUUUUUGE single 'She Looks So Perfect' - which scored them a debut No.1 on the Vodafone Big Top 40.

We thought it would be the perfect time to celebrate all things Ashton, Calum, Michael and Luke by taking a look at some of the web's best GIFs of the Australian stars.

Check out our favs and tell us yours below.

1. When Luke gave a cheeky wink to Calum in the #SLSP video

2. When Ashton played a little sing-a-long game... and was LOVIN' it!

5. How about some OLD school posing

6. This close-up of Michael is Clifford-tastic!

8. Holding this pose for their Capital FM Face-To-Face interview - pros!

9. Did someone order A Harry Styles and Ashton Irwin dance GIF?