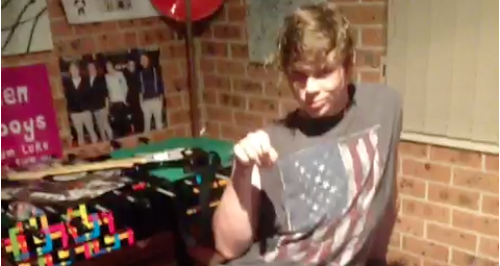 From rainbows to nipples - Ashton Irwin's most random moments in the form of Vine.

Only a purple spotted unicorn could possibly be more random than 5 Seconds of Summer's Ashton Irwin.

The fittest drummer ever (probably) also has the laugh of a schoolgirl and more hip wiggle than Shakira and Rihanna rolled into one.

We took on the laborious task of looking through thousands of six-second videos of Ashton's lovely, lovely face to bring you his most random Vines. Well, someone HAD to do it!

Seriously, has any other human being ever got this much unadulterated JOY out of a rainbow before? We don't think so.

2. When he ROFLS, he REALLY ROFLs!

Is there anything better than a man fully committed to a good old ROFL? We'd LOVE to see what he does for a LMAO...

Oooh yeah honey, you've got that model walk DOWN!

This isn't random, this is just good sense.

We like chocolate milk, and we also like Ashton. We can totally get on board with all of this.

6. Sitting is the new standing up

Who needs exercise, eh? We'll come and sit with you if you like?

8. Visiting Ashton's bedroom would probably go something like this…

You'd still be in his actual bedroom though, so we'd chalk that up as a MASSIVE win.

WARNING: This does contain a very rude word, but we like to think his nip nips make up for the potty mouth. In any case, we LOVE the fact his clothes don't cover much of his bod.

We love his funky moves, and the added Hazza definitely doesn't hurt! Two of the hottest pop stars IN THE WORLD in one clip? Yeah baby.

11. Seriously, you can NOT stop this boy from dancing

There's definitely something hypnotic about this hip action…

12. He can literally laugh on cue…

…and his laugh sounds like a little elf hyped up on sugar. Adorbs.

Yeah… he might need to re-listen to those Rosetta Stone CDs, actually… Nice hat though!

14. The hosts of 'Pimp My Ride' probably don't have anything to worry about…

We love your enthusiasm for the lights…

> If you liked Ashton's Vines, check out the BEST of Calum Hood right here