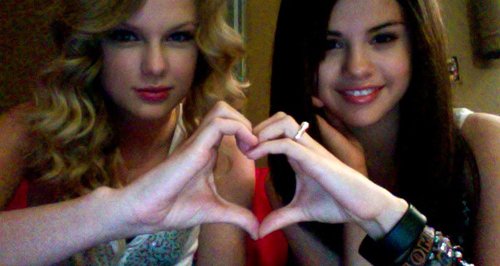 Celebrities on Twitter is pretty much our favourite thing on the planet... and it's not hard to see why!

Besides macaroni and cheese, there is literally NO combination we love better than celebrities and Twitter - it's just genius.

And 2014 definitely disappoint in the social media stakes, as there were some HUGE tweets you lot couldn't stop talking about - so naturally we got them all together to enjoy once again...

If only Bradley's arm was longer. Best photo ever. #oscars pic.twitter.com/C9U5NOtGap

Seriously, has there ever been so much star power in one picture?! Now THOSE are some happy celebrities.

2. Harry Styles gets all thankful after One Direction celebrate their four year anniversary...

4 years. Thank you to everyone who is involved in this. I feel so lucky to be part of it. Everyone who has worked with us thank you..

And the #Directioners were clearly VERY happy for him! 362,000 retweets, anyone?

3. Justin Bieber uses CAP LOCKS to catch the attention of his fans

But obviously it worked! Never under-estimate the power of the #Beliebers.

4. Poor Ariana Grande had a slight mishap with a Victoria's Angel wing earlier this year!

EVER the pro, she took it all in her stride with this hilarious tweet!

5. We CAN'T have been the only ones cheering when Taylor Swift dished out this piece of sass...

As my 25th birthday present from the media, I'd like for you to stop accusing all my friends of dating me. #thirsty

OH SWIFTY, WE SALUTE YOU.

6. Popstars getting along is our absolute FAVE - so this tweet obviously went down a treat

And thus, a bromance for the ages was born. AMAZING.

7. Sometimes Rihanna is too funny for her own good!

Who wore it best? We honestly couldn't tell you!

8. It's easy to forget that celebs can get starstuck too sometimes...

OMG BLUE IVY JUST PERSONALLY WAVED AT ME. MY LIFE IS OVER.

Poor Katy Perry, we know how it feels, love!

Yeah, he was pretty damn happy about it. #sorrynotsorry

10. OH ASHTON, you're bringing a tear to our eyes!

5SOS has existed for three years now,never in my wildest dreams would I of guessed any of this could of happened,I love you all so much!

THREE years of 5SOS already?! Here's to another 50!

11. Don't you EVER think about photoshopping Lorde, because she will NOT be happy!

i find this curious - two photos from today, one edited so my skin is perfect and one real. remember flaws are ok :-) pic.twitter.com/PuRhxt2u2O

Oh Lorde, you are the absolute BEST.

So do your best not to upset him, yeah?

Just don't ask us to bet on who won!

14. Niall Horan loves a good throwback, and this one is a GOODIE.

Thank you lads ,we've had a great time so far, you are family to me now , not just band mates ! Love you pic.twitter.com/IdUHD3vFnf

Gosh, we can't handle all this emotion!

15. Taylor Swift proved that 2014 was the year of girlfriends, NOT romances for her!

The rest of the world was black and white, but we were in screaming color. @selenagomez pic.twitter.com/UBKRvBv027

Nothing quite says 'best friendship' like quoting your own music...

16. Thank you Ashton Irwin for confirming that suede jackets are TOTALLY back in style

17. And finally, who ever knew stating the obvious could get you so many re-tweets?!

Just sitting around being 20.

We guess when it's Harry Styles, it doesn't even matter WHAT he says, does it?