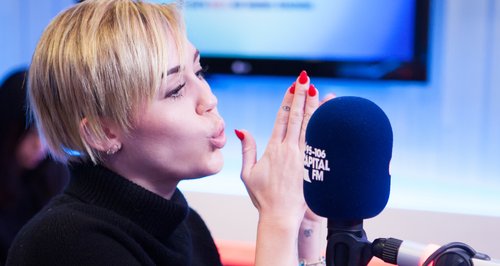 The 'We Can't Stop' singer admits she hasn't had time to think about the follow-up to 'Wrecking Ball'.

Miley Cyrus has revealed that she hopes her #smilers will help pick her next single in the UK while she's focused on preparations for her world tour.

The 'We Can't Stop' singer admitted during an exclusive webchat here on capitalfm.com that she's been so busy preparing for her world tour that she hasn't been able to think about the next song to be released from new album 'Bangerz'.

When asked by Capital presenter Pandora what her next UK single would be, Miley revealed, "You know I don't really know yet, I'm leaving it up to my fans in a way."

"I thought I was just going to keep putting them [songs] out, but then this tour took over my entire life," she added.

During the interview the 20-year-old star exclusively revealed plans to bring her 'Bangerz' world tour to the UK.


The US star told Capital that the UK is one of her favourite places to perform and revealed there will be many surprises.  "Yes, I definitely will be here," Miley declared. "This is one of my favourite places to tour. I've toured the States, South America, I did a kind of quick European tour a few years ago – it was so awesome."

Meanwhile, the singer was in the headlines across the world again this weekend after appearing to smoke marijuana on stage at the MTV EMAs 2013.


As well as picking up the Best Video prize for Vodafone Big Top 40 hit 'Wrecking Ball', she also performed twice on the night.

Miley's 'Bangerz' world tour kicks off in Vancouver on 14th February. Post your suggestions for Miley's next UK single below.