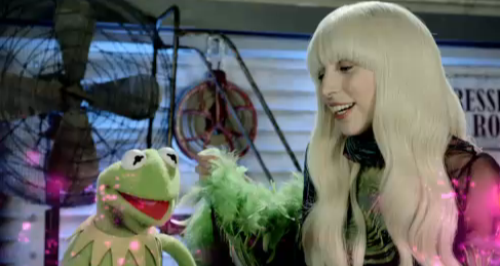 The 'Do What U Want' singer performs with Kermit and Ms. Piggy in a trailer to promote the show.

Lady Gaga has reunited with The Muppets for a brand new musical special to celebrate Thanksgiving at the end of this month, and has unveiled a trailer to promote the holiday special.

The 'Venus' singer will perform duets with Kermit the Frog and Elton John for her Lady Gaga And The Muppets Holiday Spectacular next week, and will be joined by special guests including Kristen Bell and Joseph Gordon-Levitt.

"It's been so great to see Kermie again , although a little awkward since our break-up," Lady Gaga playfully tweeted this week. "Hopefully Ms. Piggy and I get along this Thanksgiving."

This week Lady Gaga has confirmed she is now in the planning stage for a new tour to support her album 'ARTPOP', as well as teasing a potential second volume to the record.

Lady Gaga And The Muppets Holiday Spectacular airs on ABC on 28th November.