Listen to a preview of what these two chaps have in store on their team-up project.

Cody Simpson and Justin Bieber have given fans their FIRST taste of new music to come from them, while out on a top-secret photoshoot this week!

The pair have been teasing their upcoming collaborations together for weeks, and posted up a video clip of them rehearsing last night.

Justin and Cody have been very vocal about how excited they were for their project, believed to be a collaborative album, and are believed to have been filming the record's photoshoot this week out in the Malibu Canyons. 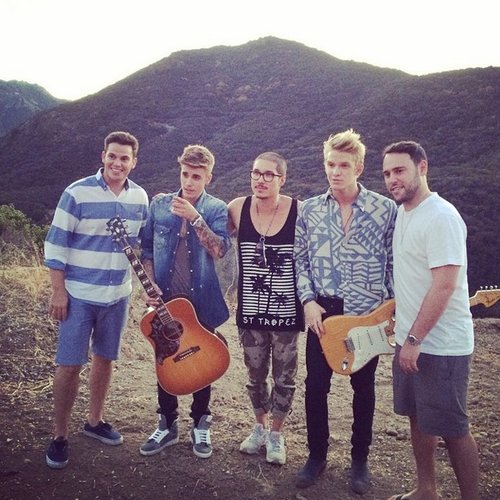 Great day of amazing pics with @justinbieber &@codysimpson yesterday. Good times @scooterbraun@itsmattgraham @alfredoflores#CreateYourMoments," photographer Nick Onken posted on Instagram, alongside a snap of him with the two stars.

And it seems fans won't have to wait TOO much longer for Justin Bieber's new music, judging from his latest tweet:

Rehearsal. Grooving. You guys are gonna be so stoked on this

Got to hear the new @justinbieber @CodySimpson today at DefJam .. It's dope! Can wait to play for you guys!

Are you excited for Justin Bieber and Cody Simpson's team-up? What do you think it will sound like?