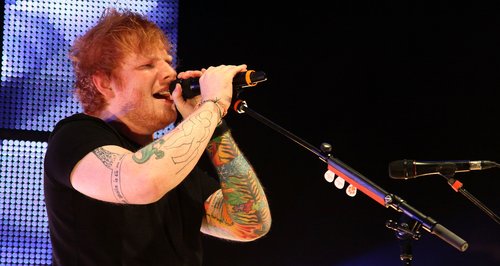 The 'Lego House' singer performed a duet with the US rapper on his hit 'Same Love' on Saturday evening.

Ed Sheeran joined Macklemore for a surprise duet over the weekend which saw him taking an almighty stage dive during the show.

The 'Small Bump' singer surprised the crowd in Buffalo, New York on Saturday night (9th November) for a duet with Macklemore on his hit 'Same Love'.

Ed then cleared people out of the way before being goaded by Macklemore into taking a huge leap into the crowd, who easily caught the 'A Team' star as part of the stage dive.

Check out a clip of Ed Sheeran taking his stage dive during the show below:

"Tonight I crowd-surfed and sung a song," Ed tweeted soon after the show. "Thank you to @macklemore and the gang for having me to be the surprise guest at their show in Buffalo!"

Ed also tweeted fans this week to thank them for supporting his new song 'I See Fire', which features on the soundtrack of The Hobbit: The Desolation Of Smaug.

"To release a song middle of the week and have it chart without radio or TV is awesome," Ed tweeted after the release. "Thanks for all the support on the hobbit chune innit.

"The real fun begins next year," he later teased.

Ed Sheeran has previously teased a release of February 2014 for his second studio album.