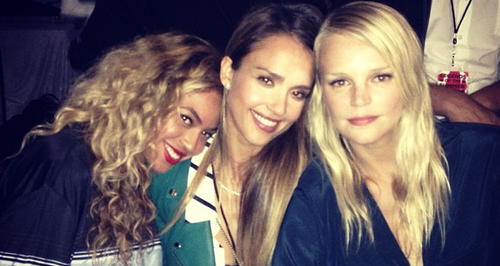 The 'End Of Time' singer caught up with Hollywood actress Jessica after her husband's show.

Beyonce hung out with Hollywood elite over the weekend when she stopped by Jay-Z's live show alongside actress Jessica Alba.

The 'Love On Top' singer stopped by the Rose Ball in Pasadena, California to watch her rap star husband and Justin Timberlake wowing hundreds of fans on their 'Legends Of The Summer' tour.

Beyonce later took to her official blog to share a snap of her and Fantastic Four actress Jessica enjoying the atmosphere backstage after the show on Sunday (28th July).

The pair were joined for their evening out by model Kelly Sawyer and Jessica Alba's husband Cash Warren.

The 'Countdown' singer was enjoying a rare night off from her 'The Mrs. Carter Show' world tour, which is currently travelling across North America.

Beyonce is due to continue performing across the continent over the coming weeks before taking the tour worldwide this autumn.