Pete's taken the pair's relationship to the next level!

Ariana Grande's boyfriend Pete Davidson has shown just how serious he is about their relationship.

The Saturday Night Live star has got two, new tattoos... and they're both dedicated to the 'No Tears Left to Cry' singer!

> Ariana Grande's Boyfriend Pete Davidson: Who Is The New BF And What Do We Know About Him

Pete chose to have Ariana's initials 'AG' inked on his right thumb and her iconic Dangerous Woman bunny ears just behind his own left ear. 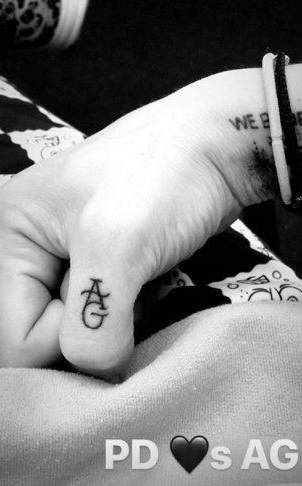 Tattoo artist London Reese shared a picture of Pete's tatt on his Instagram profile to show off his latest work, captioned "We had a good night."

We had a good night.

The bunny ears were worn by Ariana on the cover of her 2016 album Dangerous Woman and featured a lot during that era.

Pete and Ariana went public (and Insta-official) with their relationship just a few days ago, with a post on Pete's Instagram showing the couple in Harry Potter themed fancy dress.

Ariana followed this with her own Insta post a day later, showing Pete giving her a kiss and captioned "I thought u into my life... woah! look at my mind."

i thought u into my life woah ! look at my mind

Fans are going wild for Pete and Ariana already and we gotta' say - we totally ship them too.