The 'Someone Like You' star's full model will be unveiled in July and feature in the London and Amsterdam sites.

The first image of Adele's waxwork model for the Madame Tussauds museum has been unveiled.

The clay head of the 'Rolling In The Deep' star can be seen getting worked on by sculptor Louis Wiltshire in the newly released image.

The British star was strongly rumoured to be joining the collection of A-list stars in the museum earlier this year – with the new shot now confirming such reports.

The waxwork will feature in the London and Amsterdam branches of the museum and will be unveiled in full this July.

Adele follows fellow British stars One Direction by being added to the famous tourist attraction, after the boy band were unveiled last month.

Check out the first image of Adele's waxwork model being worked on below: (Picture: Facebook) 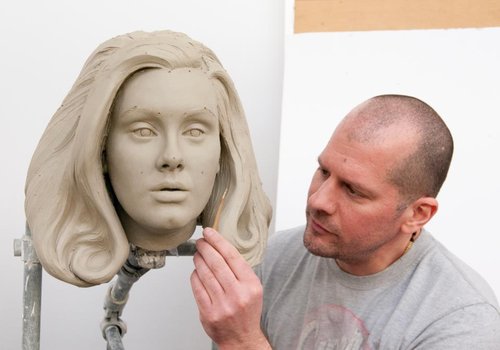 Madame Tussauds reveal that Adele "will be portrayed in dramatic performance pose".

Meanwhile, the singer is said to be currently four songs in to her new album with a release date penned in for mid 2014.