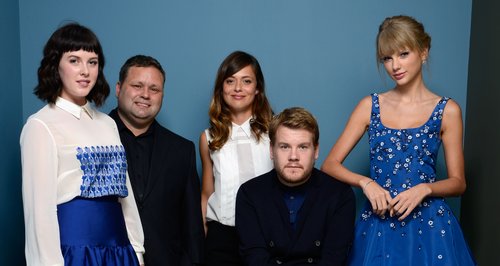 The artists both make the shortlist for next year's prize, which was won by Adele in 2013.

Taylor Swift and Coldplay are among the names shortlisted for the Best Original Song prize at the Golden Globes 2014.

The five nominees were announced earlier today (12th December) with Justin Timberlake, U2 and Idina Menzel also getting the nod.

Taylor's song 'Sweeter Than Fiction', recorded for the soundtrack to the Paul Potts biopic One Chance' will go up against Coldplay's 'Atlas' – a song made for The Hunger Games: Catching Fire.

Justin Timberlake shares his nomination with Oscar Isaac and Adam Driver for their contribution to the movie Inside Llewyn Davis on the song 'Please Mr. Kennedy.

Check out the full list of nominees for Best Original Song at the Golden Globes 2014 below:

Last year the prize was won by Adele for her James Bond theme 'Skyfall'.