Rihanna And Eminem To Perform At MTV Movie Awards 2014 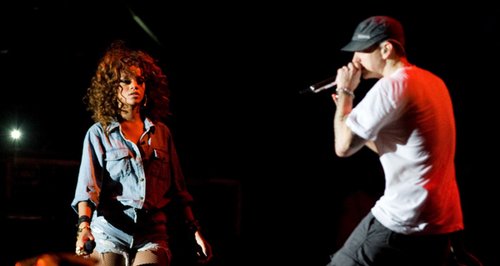 The pair will perform their 'Monster' duet at the ceremony on April 13.

Eminem and Rihanna have been confirmed as performers at this year's MTV Movie Awards.

The pair will sing their chart-topping collaboration 'The Monster' together for the first time ever live at the ceremony, which takes place in Los Angeles on April 13.

Eminem previously performed a medley of 'We Made You/Crack A Bottle' at the MTV Movie Awards 2009, while Rihanna took to the stage in 2007 with Jay Z to sing 'Umbrella'.

The pair recently announced details of their joint 'Monster' tour, which runs for three dates in the US and kicks off on August 11.

Meanwhile, Rihanna and Drake were recently spotted holding hands in London as the celebrated the end of the rapper's UK tour.