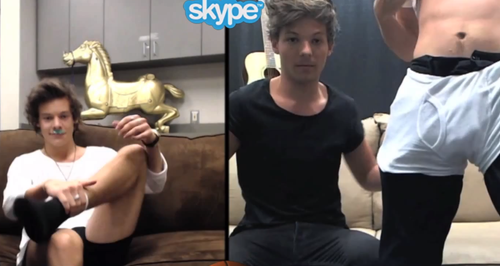 The 'What Makes You Beautiful' singers take part in a series of dressing room tasks on the US talk show.

One Direction can be seen stripping down to their underwear as they take part in a special Skype scavenger hunt with US chat show host Jimmy Kimmel.

The 'Live While We're Young' stars took part in the regular feature as special celebrity guests from their dressing rooms in Nashville.

The boys are currently out on tour in the US and were also asked to show off their best American accents during their appearance on the show.

Meanwhile, the band are also preparing for their debut movie release this summer.

One Direction will hit the big screen for their 3D concert and documentary film This Is Us in August.