Ooh-Err! What's Made Harry Styles Make THIS Face Then?! Check Out His Best Vine Faces! 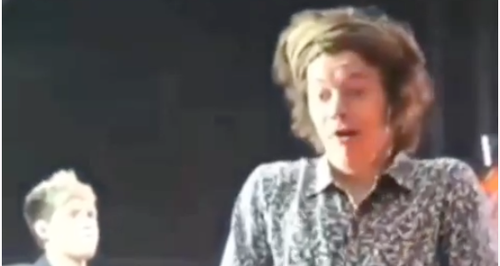 We LOVE Harry Styles' face, especially when he is making a shocked one like this. But what made the One Direction hotty react like this?

Harry Styles gives GREAT face - so we had the unenviable task (only kidding, we begged to do it) of looking at LOTS of videos of his lovely self to bring you this collection of his best ever Vine faces. You can thank us later.

We are all for safe sex but we're not sure condoms are very effective if you blow them up and throw them at people, soz. Harry clearly was NOT expecting one of those to come flying towards him in the middle of this gig, resulting in the BEST. FACE. EVER.

It starts with that amazing smile, and then turns into something else altogether. Ladies and gents, we bring you what we like to call the 'Jiggy Jiggy Dance Face'.

We're not sure what Harry was reaching out to catch, but it doesn't look like a bra was on his list… he got rid of it sharpish!

Where wll he pop up next?! Nobody knows. We can only hope the next place he appears is RIGHT HERE. (We can dream)

Because… do we even need an excuse?

There's nothing worse than someone pieing your fist bump - except when there are thousands of people in the audience to capture the moment. Harry's face is IMMENSE.

Oh Harry, you and your legs look like a sprightly little elf bouncing through the woodland.

The old rule of 'never look anyone in the eye while eating a banana' doesn't count if you are Harry freaking Styles!

Oh Harry, we love you and your wonderful face!