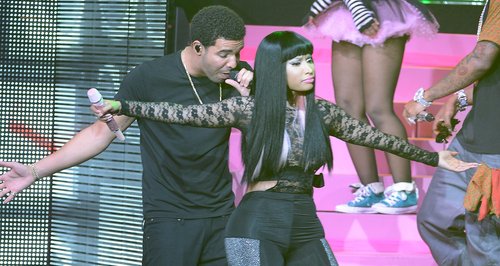 Ever fancied dating Drake? Nicki Minaj has some tips for you…

You’d have thought Nicki Minaj would want to keep Drake all to herself following some of her comments, but she has revealed some tips for any potential girlfriends…

Nicki also admitted that she didn’t recall calling Drake ‘the perfect man’ and said she didn’t think a relationship would work between them. Nicki told Capital, “I don’t remember saying that he’s a perfect man - maybe I was joking? He is perfect but I don’t know about guys in the industry. I don’t know about other artists. I think two artists [dating] that’s hard.”

So what is the best way to snag yourself a Drake? Erm, be mean to him, apparently. Nicki said, “I think what works with Drake is if you act like you don’t like him. Be horrible to him and then you’ll get [his attention].”

“I’m kidding. I think he likes intellectual women actually. He likes fat asses but I think he [also] likes a girl who can hold a conversation.” Yep, if you’ve got a big butt and you can not lie (but can have a bit of banter) you’re probably well in there.

While she may not be dating him anytime soon, Nicki will probably be collaborating with Drake for her new album, ‘The Pink Print’. She said, “ I’m a massive fan of him too, and I think that we’ll definitely have [a collaboration] on there. We’re supposed to meet up this week to get some stuff cracking in the studio. But I think there’ll be another feature on the album that’s gonna blow people away.”