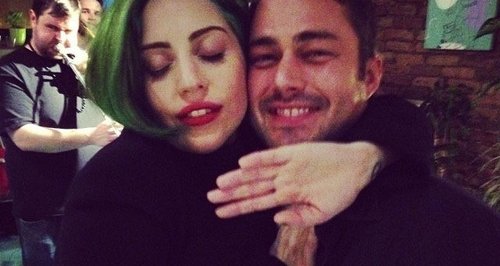 The 'Do What U Want' star also celebrated having a song feature on Taylor's US drama Chicago Fire.

Lady Gaga has been spotted alongside her man Taylor Kinney in some rare new snaps of thee notoriously private couple.

The 'Applause' star and her actor boyfriend have been dating for around two years now, and are seen embracing and pulling silly faces in new pictures of them hangout out with friends over the weekend (15th December).

Check out a picture of Lady Gaga posing with her man Taylor Kinney below (Credit: Instagram):

Lady Gaga is seen still with the bright green hair she had at Capital's Jingle Bell Ball 2013 just over a week ago, and tweeted to say she was looking forward to watching Taylor's US drama Chicago Fire with him later that night.

"Can't wait to curl up next to my firefighter tonight and watch CHICAGO FIRE! DO WHAT U WANT is featured on the show 2night! #MakingDinner" Gaga posted.

Over the weekend Lady Gaga also welcomed back "Honey B" Beyonce after the US star's surprise release of her fifth album on Friday (13th December).