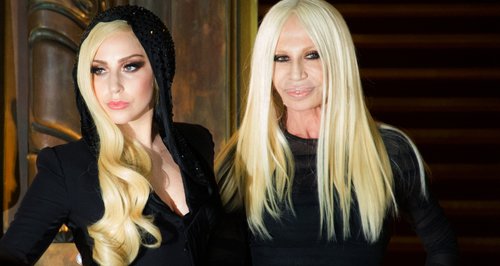 The 'Do What U Want' star and fashion head Donatella wore remarkably similar outfits for the show.

Lady Gaga attended the Versace show at Paris Fashion Week at the weekend alongside company VP Donatella Versace, with the pair dressing in complimentary outfits for the event.

The 'Applause' singer was unveiled as the new face of Versace recently for the brand's Spring/Summer campaign, and Gaga walked hand in hand with Donatella for the Atelier Versace show in Paris on Sunday (19th January).

Gaga sat front row at the catwalk show in a black, sweeping dress complete with a long train, while Donatella also wore a black dress, and both stars wore their platinum blonde hair down and straight.

The pair have had a close relationship for some time, with Lady Gaga even including a song called 'Donatella' on her latest album 'ARTPOP'.

Lady Gaga and her boyfriend Taylor Kinney headed out together to the Golden Globes ceremony last weekend, where the pair were pictured having a kiss before the event.