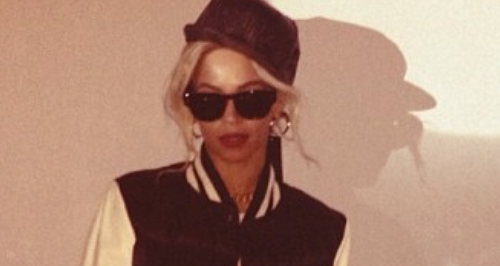 The 'Countdown' singer as revealed the song to tie in with the launch of her documentary on DVD.

Beyonce has treated fans to a brand new song called 'God Made You Beautiful' seemingly dedicated to her and Jay-Z's daughter Blue Ivy.

Listen to Beyonce's new song 'God Made You Beautiful' below:

The 'Love On Top' singer is releasing the song alongside the launch of her DVD for documentary Life Is But A Dream, and the track emerged online over the weekend.

"When you were born, the angels sighed in delight," Beyonce sings on the track, hinting that it was written about one year-old Blue.

'God Made You Beautiful' is a mid-temp ballad in Beyonce's R&B trademark style, and is one of the first new songs fans have heard since the launch of her 'The Mrs. Carter Show' tour earlier this year.

Last week Beyonce was spotted on the set of a music video out in New York City.

Despite unveiled the song this week Beyonce has yet to announce any details about her long-anticipated fifth studio album.