Ariana Grande just proved how much she loves Kris Jenner by appearing on an upcoming episode of 'Keeping Up With Kardashians.'

Ariana Grande is officially appearing on Keeping Up With The Kardashians as she enlisted the help of momager Kris Jenner for her iconic 'thank u, next' video to play the Mean Girls mum and the hilarious scene shows what good friends the superstar pair are.

Ari has been good friends with the family for a few years now, with Kris Jenner gushing over the 'superstar' before heading on down to her music video set and getting a quick dance lesson from Regina George, we mean Ari herself.

Ariana tells Kris to make the scene her own and not to be afraid to play around with it- which really gets us wondering if the iconic 'thank u next, bi***' at the end was an ad lib or if it was scripted.

The Kardashians first raised suspicions that Kris would be making a cameo in the naughties, chick flick themed music video when Kim took to Twitter to tell her millions of followers about the funniest thing she'd ever seen.

The highly anticipated music video premiered on YouTube and smashed the streaming site's record of most views in it's first 24 hours of release- having amassed a record 55.4 million views in its first 24 hours.

Watching these two icons fangirl over each other is the most amazing thing we've seen in a while and we hope Ari enlists Kris's acting skills in the future, and continues to pop up on KUWTK! 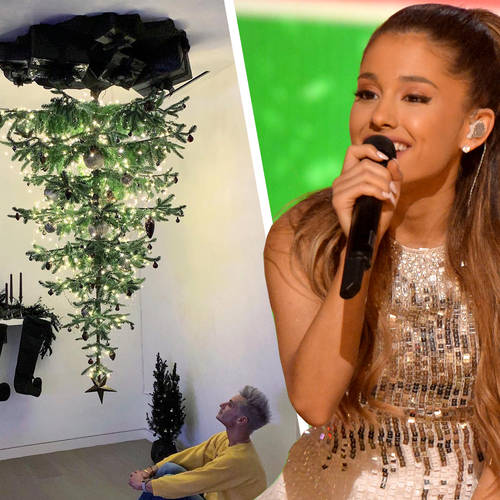 Ariana Grande Is Bringing Back Her Upside Down Christmas Tree