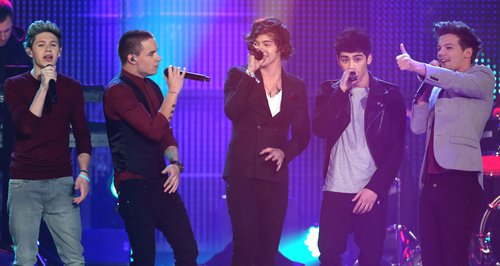 The 'Best Song Ever' stars will go into the next phase in a bid to win Best Worldwide Act.

One Direction have been announced as the winners of the Best UK And Ireland Act at the MTV Europe Music Awards 2013.

The boys beat the likes of Ellie Goulding and Olly Murs to take the prize following a fan vote.

Rudimental and Calvin Harris were also nominated for the prize, which was revealed earlier today (25th October).

The award means the group will now go through to the next stage in a bid to be crowned Best Worldwide Act - as they now take on other winners from Northern Europe.

There will be a total of ten finalists fighting it out for the Best Worldwide Act crown at the event.

The MTV EMAs 2013 take place live from the Ziggo Dome in Amsterdam on 10th November.

So far, the likes of Katy Perry, Miley Cyrus and Robin Thicke have all been confirmed to perform at the event.