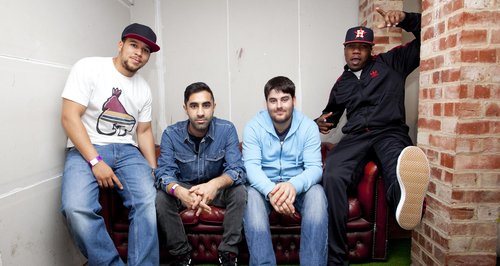 The 'Feel The Love' stars will make their debut performance at the show on Sunday 8th December.

Rudimental headed to the top of London's O2 Arena to announce their appearance at the Jingle Bell Ball 2013.

The four-piece climbed the huge structure of the venue for the big reveal and will be back on Sunday 8th December to take to the stage.

The 'Not Giving In' stars join previously confirmed stars Little Mix, Dizzee Rascal and Lady Gaga for the second night of the two-day event.

It's been a triumphant year for Piers, Kesi, Amir and DJ Locksmith who have bagged two Vodafone Big Top 40 number ones as well as a nomination for Album Of The year at the Mercury Prize 2013.

Check out Rudimental announcing their appearance at the Jingle Bell Ball 2013 from the top of the O2 Arena below:

Zoey Deutch: Everything You Need To Know About The 'Not Okay' Actress