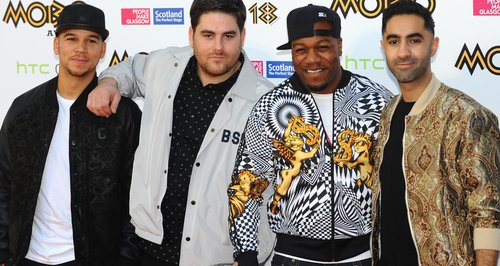 The 'Waiting All Night' stars have also told Capital that they are looking forward to seeing Pharrell tonight.

Rudimental say fans can expect a "massive Rudimental vibe" when they perform live at the BRIT Awards 2014 tonight (19th February), as well as revealing which stars they want to bump into backstage.

The 'Feel The Love' four-piece say they would "love" to meet Bruno at the O2 Arena in London later today, as well as joking about wanting a kiss from fellow BRITs performer Katy Perry.

When asked which stars they are looking forward to seeing, the 'Waiting All Night' band named Bruno Mars, Pharrell Williams and Katy Perry as their top picks.

"Bruno Mars, he's a cool guy would love to meet him. Pharrell would be wicked, we're all massive fans of him. And hopefully I'll kiss Katy Perry later!"

Rudimental are up for three gongs at the BRITs 2014 this evening, where they are also set to perform live.