A Leeds United fans group's planning more protest stunts in its bid to force controversial owner Massimo Cellino to sell his stake in the club.

The 'Time To Go Massimo' group beamed a series of 30ft high images on to Elland Road stadium before and during Monday night's goalless draw against Middlesbrough and claims to have received positive feedback from the majority of fans.

Tom Banks from the 'Time To Go Massimo' campaign's been speaking to Capital.

He said:
"We're planning a 'fly-by' as soon as the weather holds up - whether that's in a couple of weeks or not, depending on the sunny weather in Yorkshire. The pilot's basically on standby.

We're in the process of thinking what to do next. We're taking stock over the next couple of days, figure out what went well and what didn't, coz we want to keep this campaign going to keep this momentum up.

There's a couple of hundred people who've donated to the campaign, which is running at about £4,000 now. They were donating to a stunt that they didn't know what it would be - only 5 of us knew beforehand. So basically, these people were putting faith in us and donating £10, £20, £50 to the cause, which is fantastic. And we've still got money left to do other stuff.

We're quite keen to stress that we're not trying to speak for every single Leeds United fan out there. We know there are people out there who might think that Mr Cellino's doing a good job and that's fine.

We're just quite keen to send our message to Mr. Cellino and the club that we're not happy with the job that he's doing. But we're not trying to speak for all of them (Leeds fans).

The message is quite simple - look at the reaction to the protests we've been doing. Look at the number of people on board. Do what's best for the club and fans. If you truly have the club and fans at heart, then sell your stake and help us get our club back." 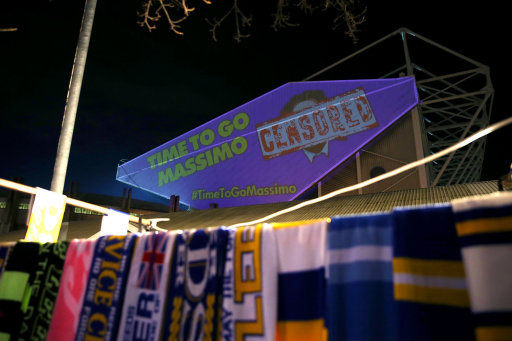