The route the Tour de France will take next year in Yorkshire has been announced, including stages in Leeds, Sheffield and York.

The 101st Tour starts in Leeds on July 5, then there’s a stage between York and Sheffield the following day, before it heads across the channel to France.

The Grand Départ of the Tour de France takes place in Leeds on the weekend of the 5th and the 6th July. The first stage races from Leeds to Harrogate via the Yorkshire Dales National Park

The second stage races from York to Sheffield via Pennine Yorkshire.

It finishes in Paris on July 27.

The opening stage to Harrogate is expected to end in a sprint, giving him the chance to win the race in his mum’s home town. The second, hilly stage is from York to Sheffield and could shake up the general classification

The Yorkshire start will be the fourth time the race has visited the UK and first since 2007.

The route was announced in Paris today and a group from Yorkshire attended the ceremony.

Get all the Tour information here - www.letouryorkshire.com

Special signs are going up along the route over the next few months so people in Yorkshire can cycle the official TDF route.

The first one went up this morning. 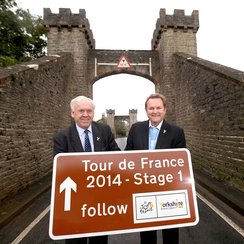