Police divers are helping to search for a 22 year old man, who went missing after a night out in York.

Ben Clarkson was last seen outside Fibbers Nightclub on Stonebow in York city centre around 3.30am on Sunday.

North Yorkshire Police said the underwater team are searching the River Foss, as one of a number of lines of inquiry.

It comes days after the body of 20 year old University student Megan Roberts was found in the River Ouse near York.

She disappeared during a night out with friends in the city in January. Her body was found on Sunday near the Ship Inn at Acaster Malbis.

It is thought the York St John University student fell into the river while she was drunk. 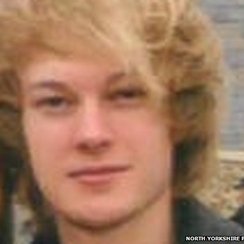 North Yorkshire Police said it was unusual for Mr Clarkson not to contact his friends or family.

He was last seen wearing dark jeans, a grey T-shirt with an Eiffel Tower logo and a black leather jacket. He is described as white, 6ft (1.83m) tall with collar-length blond hair.