10 years after the 7/7 terror attack in London, an extremist sympathiser from Bradford's told Capital not enough's been done to stop it happening again.

Alyas Karmani was an activist in the 70s, but is now a youth worker.

He says isolation from the community is what often influences young Muslims to turn towards the extremist ideology.

Alyas is now an Imam in Bradford and runs Street UK - a project working with young muslims at risk of being radicalised.

He claims that the Prevent programme, which is run by the police, criminalises young people, and the Muslim community, at the point of contact.

We contacted the Home Office to speak to a minister but they declined.

They did tell us their Prevent programme - which works specifically with communities at risk of radicalisation 'explicitly tackles all forms of terrorism and non-violent extremism.

Prevent is not about spying on anyone. It is about protecting those who might be vulnerable to the poisonous and pernicious influence of radicalisation. People who are supported by Prevent programmes are not criminalised in any way.'

They went on to say that they've trained 300,000 people to identify and prevent extremism, stopped more hate preachers entering the country than any other government and taken more than 95,000 pieces of terrorist propaganda off the internet.

He says he feels angry when all muslims are labelled for extreme actions that just a few people make:

This is how events unfolded on Thursday July 7 2005, the day four suicide bombers brought terror to London.

:: 3.58am: A light blue Nissan Micra hired by Shehzad Tanweer, 22, and thought to have had Mohammad Sidique Khan, 30, and Hasib Hussain, 18, as passengers is caught on CCTV in Hyde Park Road, Leeds, before joining the M1. 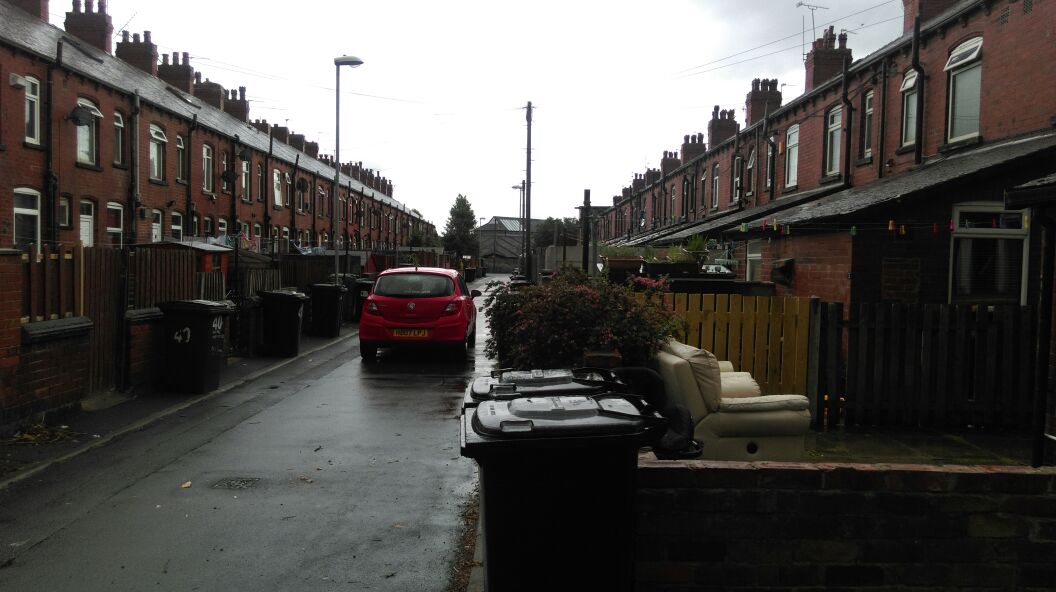 PICTURED ABOVE: A street in Beeston, Leeds

:: 6.49am: The Micra arrives at Luton and parks next to the Brava. All four men get out and appear to move items between the two boots before putting on rucksacks.

:: 7.15am: The men enter Luton station and go through the ticket barriers heading to the platform for the Thameslink train to London King's Cross.

:: 8.23am: The train arrives at King's Cross, slightly late after a delay further up the line. The four head in the direction of the London Underground system. 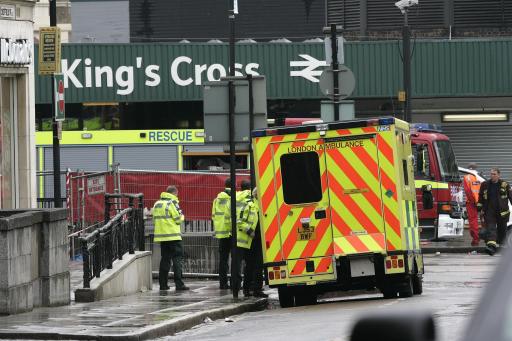 :: 8.50am: Three bombs explode within a minute on London Underground trains.

:: Liverpool Street: Seconds after leaving the platform the eastbound Circle Line train is blown up by Shehzad Tanweer - almost certainly in the second carriage from the front. Eight people die including Tanweer, with 171 injured.

:: Edgware Road: The westbound Circle Line train is blown up by Mohammad Sidique Khan. who is also in the second carriage from the front. Seven people including Khan are killed, and 163 injured.

:: Between King's Cross and Russell Square: Jermaine Lindsay blows himself up in the packed front carriage, killing 27 people including himself and injuring more than 340. 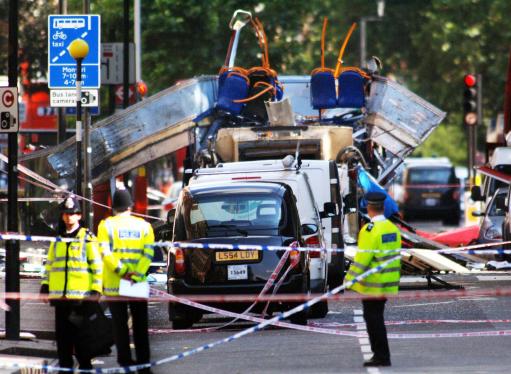 :: 8.55am: Hussain walks out of King's Cross Underground station and tries unsuccessfully to contact the other three.

:: 9.19am: A man thought to be Hussain is seen on a bus to Euston, from where he is believed to have boarded the Number 30 bus.

:: 9.30am: Cobra, the Government's national crisis management facility, is activated in response to the explosions.

:: 9.47am: Hussain detonates his bomb on the number 30 bus at Tavistock Square, killing 14 people including himself, and injuring more than 110. 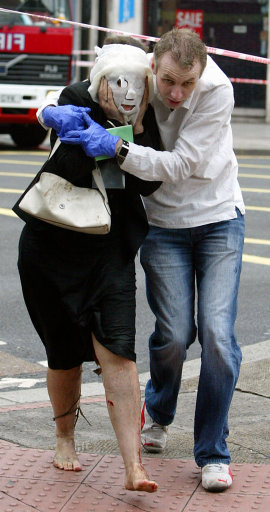 PICTURED ABOVE: A victim's helped away from the scene to the 7/7 bombings

:: 10.21am: Scotland Yard confirms there have been ''multiple explosions'' in London.

:: Noon: Prime Minister Tony Blair, speaking at the G8 summit in Gleneagles, says: ''It is reasonably clear there have been a series of terrorist attacks in London.''

:: Afternoon: There are subsequent statements from Home Secretary Charles Clarke in the House of Commons, and London Mayor Ken Livingstone in Singapore with the 2012 Olympic bid team. Mr Blair returns to London during the afternoon.

:: 11.40pm: Among several items reportedly found by a police exhibits officer are cards and personal items in the name of ''Sidique Khan'' and ''Mr S Tanweer'' at Aldgate.