William And Kate In Hampshire For St Patrick's Day Parade 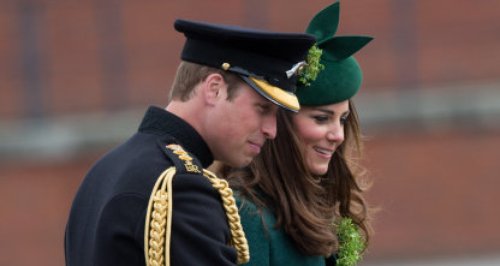 The Duchess of Cambridge has presented shamrocks to Hampshire soldiers from the Irish Guards as the regiment marked St Patrick's Day in traditional fashion.

Kate handed out the sprigs as William, Colonel of the Irish Guards, watched the ceremony at the regiment's base Mons Barracks in Aldershot.

Hundreds of proud wives, girlfriends, and parents were seated on the parade square to enjoy the presentation of the shamrocks, a century-old tradition inaugurated in 1901 by Queen Alexandra, the wife of the Edward VII.

In the past the role was famously carried out by the Queen Mother, but also performed by the Princess Royal and many others over the years, in many different countries.

The Cambridges arrived at the military base by chauffeur driven car and were greeted by the commanding officer 1st Battalion Irish Guards, Lieutenant Colonel Ed Boanas.

In keeping with the day, the Duchess wore a stylish emerald green coat by Hobbs and matching hat by Gina Foster, and wore a gold Cartier Irish Guards brooch, a Royal Family heirloom also worn by the Queen Mother.

The Duke looked smart in a Household Division frock coat and carried a ceremonial sword.