The multi-coloured statue, promoting its Zany Zebras art trail, was taken from a truck in the city last Tuesday (10 May). Gilbert was found in a back garden in the Shirley area at the weekend.

Police say they're still looking into who was responsible. 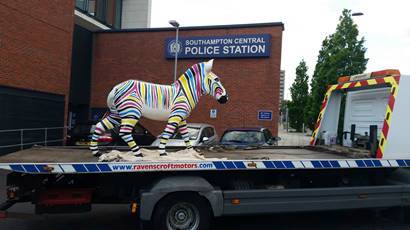 A Hampshire Police statement on their Facebook page said:

'We are pleased to confirm that Gilbert, the original Zany Zebra, has been found safe and well.

'Officers located the colourful fibre glass sculpture in a back garden in the Shirley area of Southampton yesterday evening.

'His owners, Marwell Zoo, were informed of the good news and are delighted to have him back so that he will be able to take part in their public art extravaganza, Zany Zebras, which will see a herd of brightly coloured zebras take to the streets of Southampton this summer.

'Gilbert had been stolen overnight on Tuesday (May 10) from a pick up truck in Burgess Road.

'Enquiries are ongoing to establish how Gilbert came to be in Shirley.

'We would like to thank members of the public for their help in sharing the appeal to find Gilbert.'