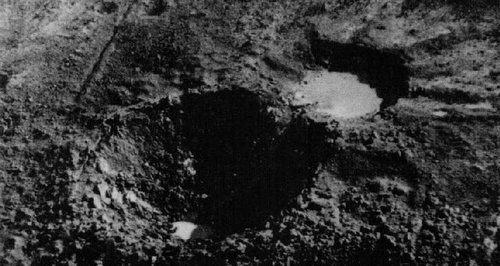 Archaeologists in the New Forest National Park will use innovative techniques to discover the remains of a World War II target range where the biggest bomb ever dropped by British forces was first tested.

The tests at the Ashley Walk bombing range at Fritham included a unique target building, titled the ‘Ministry of Home Security Target’, but nicknamed the ‘Sub Pen’ by locals because of its likeness to German submarine pens. After the war it was buried, hidden from view underneath the landscape for more than 60 years.

Now archaeologists, led by the New Forest National Park Authority, will use ground penetrating radar and electrical imaging to discover what remains of the ‘Sub Pen’, confirm whether chambers inside still exist and whether the structure needs future conservation. The non-intrusive techniques could also shed light on local rumours of buried bombs or airplane parts inside the structure.

Archaeologists will be using ground penetrating radar, electrical resistance tomography (ERT) and gradiometers to build a picture of what’s left of the ‘Sub Pen’ buried underneath the ground.

The New Forest Remembers World War II Project is a Heritage Lottery Fund project. It is hosted by the New Forest National Park Authority, and supported by a wide range of organisations, including ExxonMobil and English Heritage, both financially and through staff time.

The project is carrying out essential archaeological surveying of part of the New Forest National Park including an airborne infra-red Lidar survey (light detection and ranging), mapping work and field surveys.

An outreach programme is being designed to encourage local communities, groups and organisations to get involved. Teaching resources and educational activities will also be developed to link World War II archaeology with the National Curriculum.