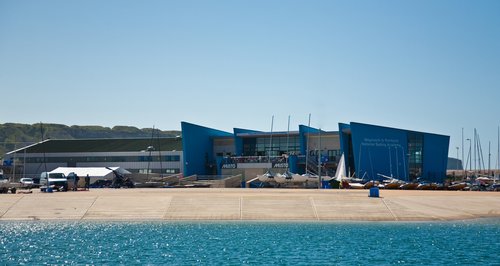 A Foundation was set up in Andrew's memory after the 36-year-old from Sherborne died last year while training for the America's Cup.

The Weymouth and Portland National Sailing Academy has announced a prestigious new collaboration with the 'Andrew Simpson Sailing Foundation' (ASSF). The ASSF founded by the Academy's Director, Sir Ben Ainslie, Iain Percy OBE and Andrew's wife Leah to honour his life and legacy, will be opening the Andrew Simpson Sailing Centre at the same venue where Andrew 'Bart' Simpson competed during the 2012 Olympic Games.

The Weymouth and Portland National Sailing Academy, based in Andrew's home county of Dorset, will act as a hub for all of the 'Andrew Simpson Sailing Foundation's' activities, helping the Foundation fulfil its charitable objectives.

The RYA accredited Centre offers a range of sailing courses for young people, community organisations and adults; including programmes for schools, as well as club sailors.

Peter Allam, Chief Executive at the Weymouth and Portland National Sailing Academy explains the relevance to the local community:

"The ASSF has agreed to work closely with the Academy and the Chesil Trust to deliver the 'Rod Shipley Sail for a Fiver' scheme which has to date assisted 12,000 local children to experience sailing on the waters of Portland Harbour. The scheme has run successfully for 10 years and currently introduces 1,500 children to water sports annually.

"The Academy is committed long term to inspiring the next generation through sailing. Working in hand with the ASSF, this relationship will make a significant contribution to the ongoing development of the Olympic and Paralympic sailing legacy here at the WPNSA".

"The Andrew Simpson Sailing Foundation was set up in memory of Olympic sailor Andrew Simpson to inspire the next generation through sailing. Andrew was very passionate about encouraging people to make the best of the opportunities that they were given. Through the Foundation's activities we intend to provide opportunities to thousands of young people, and those who grasp it with both hands and show dedication, will be given significant support to reach their potential in the sport of sailing and the wider maritime industry through apprenticeships"

Amanda Simpson, Andrew's sister and a Trustee of the Andrew Simpson Sailing Foundation as well as being an accomplished sailor in her own right said:

"This is a fantastic opportunity for ASSF to engage with grass roots sailing in a place where Andrew spent much of his youth and adult sailing life. We look forward to working with local and national communities to make this venture at the WPNSA a huge success".

"Reflecting the Foundation's objective to inspire the next generation through sailing, the Centre will be a place where we can inspire Andrew's drive and determination through delivering everything from taster courses to longer term development and mentoring. It will offer schemes to provide opportunities for deserving young people, something that Andrew himself was always so passionate about."

The Weymouth and Portland National Sailing Academy is a world class sailing venue and effectively promotes the sport of sailing to all levels of competence and ability, through courses, training and events, whilst supporting and working closely with the local community.

The WPNSA was the venue for the sailing competition at the London 2012 Olympic Games and Paralympic Games and Weymouth and Portland has been recognised as having some of the best boating waters on the planet.

The Academy currently runs a number of high profile regattas throughout the year and boasts fantastic conference and event facilities.