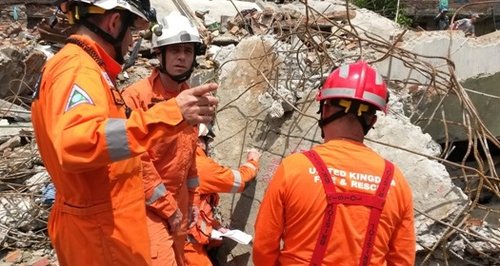 Hampshire firefighters who have returned from helping the survivors of the earthquake in Nepal have spoken of the ``total devastation'' of homes and villages.

A team of 10 firefighters from Hampshire Fire and Rescue Service deployed to Nepal as part of the UK International Search and Rescue (UKISAR) squad scrambled by the Department for International Development.

Arriving about 36 hours after the quake hit, the team helped residents of Kathmandu and villages in the Himalayas.

Neil Brice, from Liphook, was part of a team flown by helicopter to reach remote villagers where they were the first aid to arrive.

He said their main roles were distributing water, rations, helping doctors in their team reach the injured and help establish shelter for those whose homes had been destroyed.

Mr Brice said much of the searching of the collapsed houses had been carried out by the residents themselves.

``It was complete devastation, whole villages were flattened. It is hard to see when someone has had their whole livelihood destroyed.

``It was emotional but they were so pleased to see us, they seem to be moving on. The houses that had fallen down were small structures and most people had hand-balled them themselves, they had sorted out the dead and alive and were setting up tents.''

Mr Brice said the main problem facing villagers was shelter and the team had left behind their entire supply of tents, sleeping bags, mats and torches to provide temporary homes as the local population faced the monsoon season which will be arriving in the coming weeks.

He said: ``Normally we bring our kit back but we left our tents for shelter for the Nepalese because they simply had nothing.''

Marcus Hill, 44, from Southampton, praised the residents of Kathmandu for their ability to continue with their lives despite the destruction in their city.

``My impression when we arrived was total amazement that these people were already going about their daily lives which seemed quite odd, you would think they would still have shock or terror on their faces but one of the interpreters told me that they had been waiting for the earthquake all their lives and they could sleep easy now that it had happened.''

Mr Hill described how his team helped re-open a teaching hospital in the capital that had been closed because of a collapsed tower on the roof overhanging the operating theatres.

``It seemed like an everyday job to do what we do best but it meant 700 more beds could be opened which was important as there were more injured people than fatalities.''

Phil Clack, 52, from Fareham, said he too was amazed by the local residents in the villages.

He said: ``It was certainly total devastation but it was almost as if it was a way of life, they were used to hardship, it seemed it has caused an inconvenience but life has to go on for them.''