Research has found rolled tobacco popularity has doubled in the North East since 2009, with more than 153,000 people smoking roll-ups.

Fresh North East believe people smoking roll-ups could be kidding themselves it is less deadly.

The warning that roll-ups are just as harmful comes as new figures show 30% of smokers in the North East - around 153,000 people - smoke roll-ups as part of their overall tobacco consumption.

Hand rolling has doubled since 2009, meaning many smokers have switched from smoking just cigarette sticks.

Today, Public Health England launches a powerful new campaign to highlight how smoking damages the body and causes a slow and steady decline in a process akin to rotting.

The campaign launches as a new expert review commissioned by Public Health England highlights the multiple impacts that toxic ingredients in cigarettes can have on your body. Whilst many smokers know that smoking causes cancer and harms the lungs and heart, the new report highlights how it also damages:

Bones and muscles
Smoking causes progressive harm to the musculoskeletal system, and has a negative impact on bone mineral density.

Harms include:
* 25% increased risk of any fracture and a 40% increase in the risk of hip fractures among men
* Slower healing after injury
* Increased risk of back and neck pain, leading to a 79% increase in chronic back pain and a 114% increase in disabling lower back pain
* Significant cause of rheumatoid arthritis and can reduce the impact of treatment
* Brain - Current smokers are 53% more likely to develop cognitive impairment than non-smokers and 59% more likely to develop Alzheimer's disease
* Teeth - Smoking increases the likelihood of tooth loss and decay
* Eyes - Smoking damages sight by increasing the risk of age-related macular degeneration (AMD) by 78%-358% and increasing the risk of age-related cataracts

With New Year's resolutions approaching and two thirds of smokers saying they want to quit, new adverts are being used to graphically illustrate the degeneration that smoking causes. 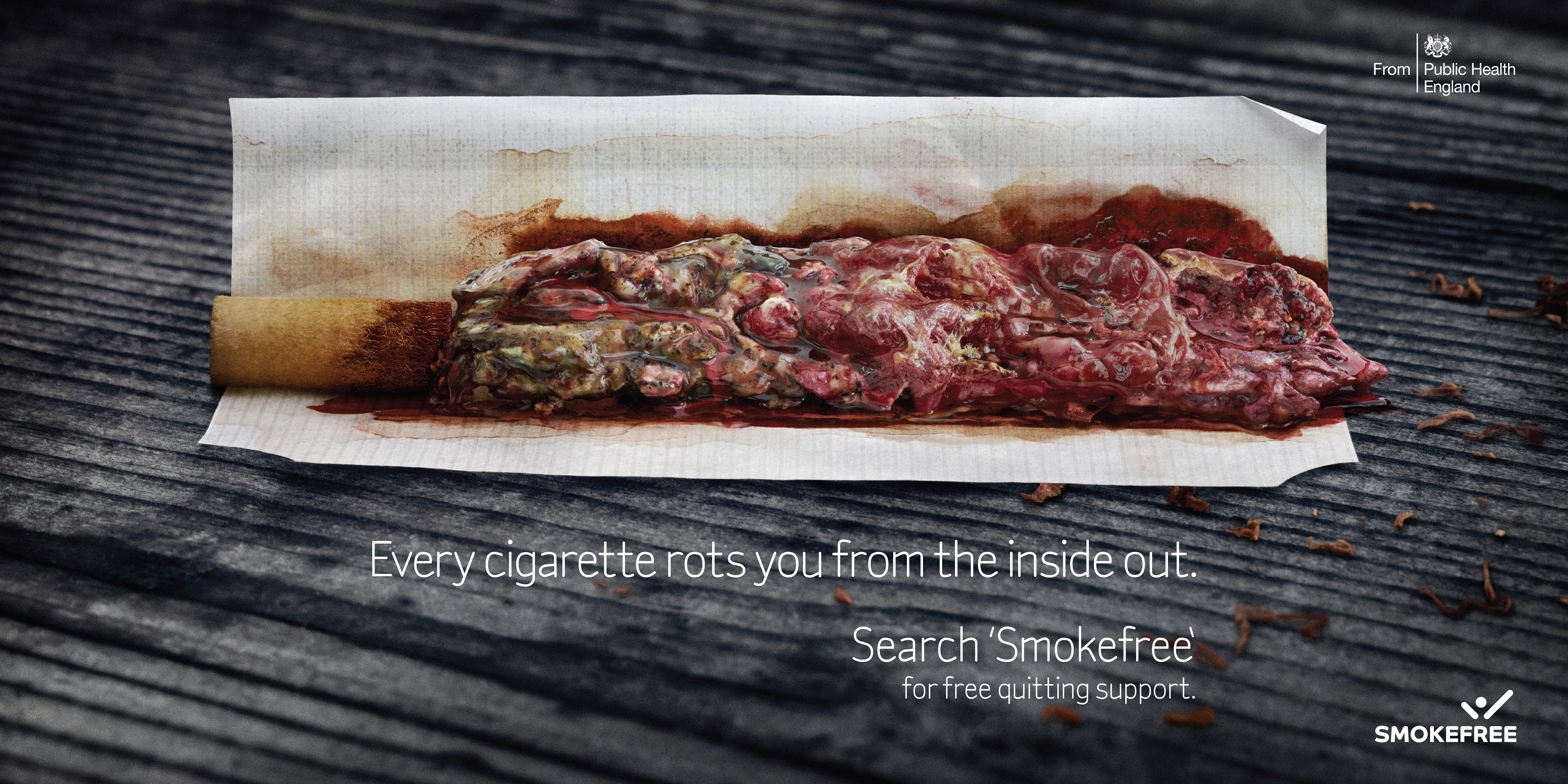 The campaign also tackles common misconceptions around hand-rolled tobacco, or roll-ups. Use of roll-ups nationally has increased significantly.

New figures show that half of smokers (49%) who only smoke roll-ups wrongly believe they are less harmful than manufactured cigarettes. In fact, hand-rolled cigarettes are at least as hazardous as any other type of cigarette.

Roll-ups contain as many harmful chemicals as manufactured cigarettes and smoking them attacks the body and causes the same health risks including cancer, stroke, heart and lung disease, impotence, infertility, and even amputation from Peripheral Arterial Disease. Yet some roll-up smokers believe hand rolling tobacco is more natural and avoids some of the health risks.

Lisa Surtees, Acting Director of Fresh, said:
"Most roll-up smokers are price conscious, and we have seen an increase since the start of the recession. But some smokers also wrongly believe it is more natural and contains fewer chemicals.

The truth is that the tobacco inside is full of the same toxic chemicals as manufactured cigarettes. If it is smoked without a filter it can actually be more harmful for the smoker.

It is vital people know that roll-ups are not organic, not natural, not pure, but are just as deadly. Hand rolled will kill one in two long term smokers, just the same as all cigarettes."

Professor Dame Sally Davies, England's Chief Medical Officer comments:
"Whilst many smokers know the damage cigarettes do to their hearts and lungs, they are much less likely to be aware of how harmful smoking is to the body - essentially 'rotting' it from the inside out, and roll-ups are no exception.

January is a time when many people make New Year's resolutions to improve their health and try to stop smoking. Millions of people have used Smokefree support and we are hoping that this year, even more will take advantage of the free expertise and resources on offer."