Police have released CCTV images after a travel agents was robbed at knife-point in Ripley in Derbyshire.

On Friday, June 27 at 9.43am a man entered Thomson travel agents on Oxford Street holding a knife and told staff to get into the back room where he stole currency from the safe.

The man left the shop with a large quantity of currency and ran along High Street heading in the direction of Wall Street. 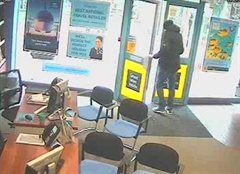 Anyone that recognises the man is asked to contact Amber Valley CID quoting crime reference number 26677/14.