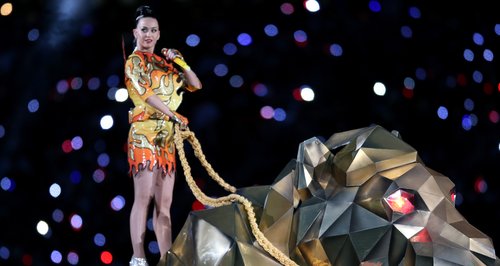 From power walking to grinding on Lenny Kravitz, these are the GIF moments we can't forget about.

Katy Perry, we salute you! The 'Roar' superstar put on a show we'll likely NEVER forget at last night's (1st February) US Super Bowl XLIX, with everything from dancing sharks to giant robotic tigers!

The world was watching with their jaws on the floor as Katy powered through her biggest songs alongside special guests Missy Elliott and Lenny Kravitz, and the Internet pretty much went into meltdown several times during the show!

To pay tribute to no doubt one of the GREATEST Super Bowl shows we've ever seen, see below for the 11 GIFs that basically broke the Internet… all thanks to Ms. Katy Perry!

Making her way into the University Of Phoenix Stadium riding on the back of a GIANT robotic tiger... with fireworks going off? Yeah… that was a pretty cool entrance.

What's better than bringing some AMAZING dancers with you for the show? Dressing those incredible movers and shakers up in crazy horse costumes, NATCH!

The moment Katy and Lenny Kravitz hit the power stance together, pyrotechnics went off and millions of people simultaneously started swooning...

Katy Perry stomping and grinding with the ever-sexy Lenny on that Super Bowl stage? Yeah... this GIF will stick in our minds for a LONG time

When Missy popped up on that stage and 'Get Ur Freak On' started playing, EVERYONE started rapping along with the Queen Of Hip-Hop

Katy Perry BELTS out those high notes... and gives us the PERFECT GIF for those fiery moments!

Dancing sharks and palm trees? In what universe is that NOT worth sharing as a GIF? Not one we want to live in...

Katy DEFINITELY wasn't out-done in the dancing stakes by her finned friends!

Katy Perry being surrounded by crazy robot dancers from the future? Yeah, not forgetting that one for a while...

Thank you Katy Perry... you've kept us supplied with GIFs for our EVERY human emotion for at least the next month. Bravo! 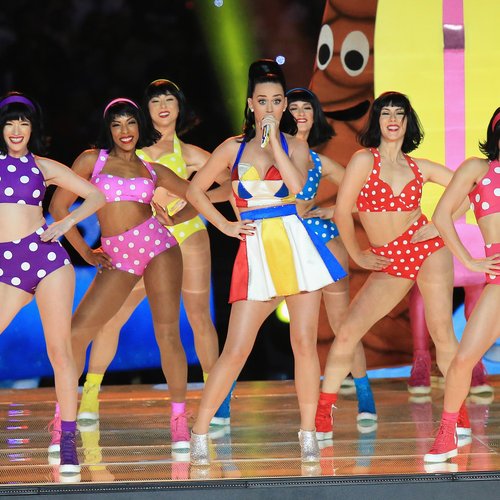