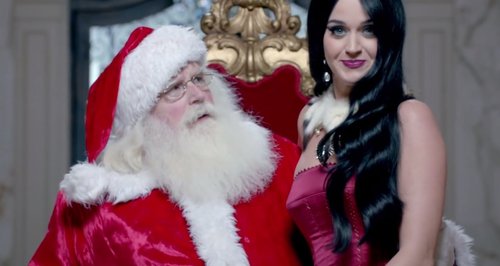 The 'California Gurls' star also wishes her fans a "very Perry Christmas' in the new promo.

Katy Perry has unveiled a festive themed advert for her fragrance Killer Queen that sees her meeting Santa Claus.

The 'Roar' singer launched the perfume earlier this year and has now released a Christmas version ready for the festive season.

The 'Unconditionally' star wears a red corseted cress in the clip as she sits on Santa's knee and asks for a "picnic on Machu Picchu" for Christmas.

Katy also wishes all of her fans a "very Perry Christmas' as the advert draws to a close.

Katy Perry is set to kick off her new 'Prismatic' tour in May 2014 and has just added new dates in Birmingham (14th May) and Manchester (24th May).