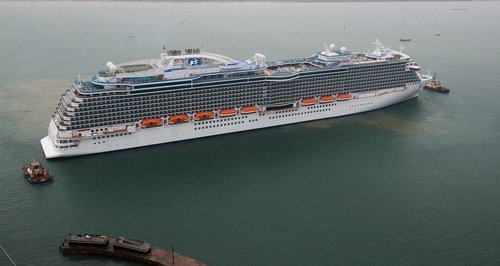 Ten cruise ships will be heading into and out of Southampton port over the next three days.

It means tens of thousands of passengers passing through the city between Thursday and Saturday.

The Royal Princess (above) has returned to Southampton this morning, for the first time since being named by the Duchess of Cambridge last year.

Two other ships are also in today, and Cunard's Three Queens will arrive tomorrow - as well as P&O's Arcadia.

A further three ships will visit on Saturday.

Cruise ship visits have recently caused problems on the roads around the Docks, due to the roadworks around Platform Road and Town Quay. This is expected to continue through the summer.

'As Europe's busiest cruise port, Southampton's road network carries more than its share of traffic throughout the peak summer cruise season. This year has been no exception but the good news is that the 'Platform for Prosperity' scheme is being carried out to improve access to the Eastern Docks and will significantly reduce congestion in the years to come.

'Once completed the new road layout around Platform Road and Town Quay will significantly reduce journey times and will also support the continued growth of Southampton's cruise and port business, creating new job opportunities for around 500 people.

'Southampton's port and cruise industries are economic success stories with growth forecast to continue. It is essential that the council provides the infrastructure to meet the needs of these vital contributors the city's economy -each ship generates an estimated £2million in trade for local businesses. Failure to deliver improvements to the road network could mean the city misses out on these opportunities. The works will also provide the additional road capacity needed to support the major developments planned at Watermark West Quay and Royal Pier, which will bring thousands more jobs to the city.

'The Platform for Prosperity works are due to be completed by the end of this year, but before then drivers are advised that they could experience longer journey times in this part of the city centre and on the main routes into the port on the busiest days. May and June are forecast to be particularly busy, with multiple large cruise ships due in port on a number of days as the summer season gets into full swing.

'The council has worked with partners across the city, including Associated British Ports (ABP) and the cruise operators, to forecast the peak days for cruise movements and other events that could have an impact on the road network. The busiest times are likely to be between 8:30am and 3pm on each of the following days:

- Thursday 8 - Saturday 10 May
Three cruise ships will be in port on each of the days - as well as a scheduled visit from Cunard's 'Three Queens' on Saturday 9 May to celebrate the QM2's 10 years in service - which is expected to attract large numbers of visitors from across the region.
- Saturday 17 May
Over 12,000 cruise passengers will be making their way to and from the port.
- Friday 23 - Saturday 24 May
Cruise passenger numbers will be over 10,000 on both days, with additional traffic expected due to the half term break.
- Friday 30 - Saturday 31 May
Nearly 25,000 cruise passengers will be entering and leaving the docks over the two days, generating a significant number of additional vehicle journeys.
- Wednesday 4 - Thursday 5 June
Two large cruise ships in port, including Queen Elizabeth which will be bringing the Commonwealth Games Queen's Baton to Southampton ahead of a number of celebration events.
- Wednesday 11 - Monday 16 June
There will be a number of cruise ships in port across the six days, with additional traffic expected to be using the Red Funnel ferry service heading for the Isle of Wight Festival.
- Saturday 28 June
Around 10,000 cruise passengers will be accessing Dock Gates 4 and 8 on this day.

'Find out more about road works and traffic management in Southampton, as well as what is being done to keep the city moving, at www.southampton.gov.uk/s-environment/roadsandparking.

'Receive updates on the progress of the Platform for Prosperity scheme by signing up to Stay Connected, our email update service. Get up-to-the-minute information on what's happening on the city's roads by following @scchighways on Twitter.

'Find out how road works are affecting traffic, including real time CCTV images of traffic flow, on the Citywatch webpage'