With each of the three classes contesting the 11th and final race of their series, Lucas consolidated her position as Britain’s most successful sailing Paralympian, adding Rio 2.4mR one-person keelboat bronze to London 2012, 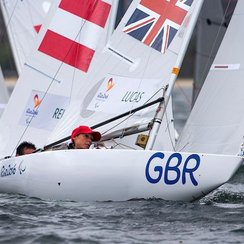 while Rickham and Birrell replicated their feat from four years ago in the SKUD18 two-person keelboat class. 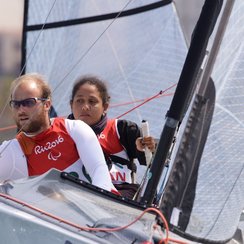 Their success means that the British Sailing Team has achieved its pre-Rio target of two medals.

Rickham and Birrell, who finished today’s race in fourth, admitted they were elated with their medal after a close-fought battle for silver with the Canadian boat. Dan Fitzgibbon and Liesl Tesch (AUS) had already secured the gold medal yesterday.

Rickham said: “We feel relieved. It was close to being silver but John McRoberts and Jackie Gay (CAN) sailed a fabulous regatta and they really deserved that medal. We're just elated. It's great to be able to come away with another medal.”

Birrell continued: “To have two Paralympic medals is just surreal. They don't come easy and I'd like to thank everyone who has ever helped us in our SKUD programme. Thank you so, so much. We came for gold but we're super happy with bronze because we've had to fight so hard in our boat for every metre and every position.”

Having headed into today’s race in pole position overall, Lucas’ achievements were tinged with disappointment after she found her progress had been hindered during the race by a plastic bag on her rudder. France’s Damien Seguin ultimately took gold with Australia’s Matt Bugg claiming silver as Lucas crossed the line in 15th place.

She said: “It was an absolute fight in the mix, I couldn’t break out or break free no matter what I did. I kept thinking I was doing the right thing and getting the shifts right but I didn’t have the speed I’ve had all week because I was towing a bag.

“I came in to this event with my eyes wide open and I thought there would be six of us in contention for the medals so when everything settles down a bit I will be happy I’m on the podium because it is such a competitive fleet. I’ll let the dust settle and be happy with a medal. I did give it my best.”

Meanwhile the British Sonar team of John Robertson, Hannah Stodel and Steve Thomas kept to their vow of ending their Rio campaign on a high having headed into today already knowing a medal was beyond their reaches. The team finished third in the race to end the event ninth overall

But Robertson admits although disappointed not have secured the Paralympic silverware that has eluded them at their fourth Games, they did have some standout moments to be proud of during the Brazil experience.

He said: “It was good to finish on a high note, it just shows what we can do. The Wednesday when we got the three bullets was pretty awesome; there was a nice bit of breeze and we really got into.

“We sailed the boat well today but to be honest we're just pretty disappointed not to be on the podium and not to get a gold medal. That's just sport and we weren't quite good enough this week. Even though we tried our best it didn’t all quite gel at the right time and that happens sometimes.”