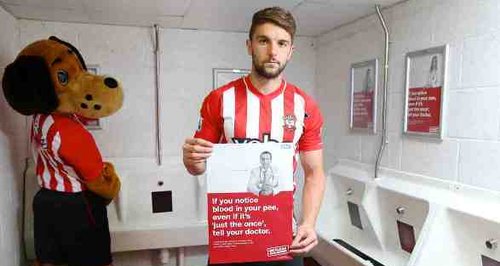 Heat-reactive posters have been installed in the urinals in the men's toilets in time for this afternoon's game against Sunderland to raise awareness of the key symptoms of bladder or kidney cancer.

When 'used', the heat reactive posters reveal the Be Clear on Cancer campaign message ‘if you notice blood in your pee, even if it’s ‘just the once’ tell your doctor’.

The earlier these cancers are diagnosed, the higher the chance of survival, so being aware of the symptoms is crucial. Southampton FC forward Jay Rodriguez, has stepped in to urge Saints fans to be aware of the symptoms. The England international, alongside club mascot Sammy Saints, lent his support to the campaign, which has seen ‘thermochromic posters’ installed in stadium urinals at St Mary’s ahead of the home game against Sunderland. When used, the heat reactive posters reveal the Be Clear on Cancer campaign message ‘if you notice blood in your pee, even if it’s ‘just the once’ tell your doctor’.

As well as installing the thermochromic posters in the urinals for the game, the club will also run campaign advertising in their match-day magazine and on stadium screens. Additionally, Be Clear on Cancer event staff will also be able to talk to fans and hand out symptom reminder cards.

“As a footballer I am always keeping an eye on my health and we want our fans and their loved ones to do the same. If you notice something unusual, like blood in your pee, you should always go straight to your doctor. That’s why I’m supporting the Be Clear on Cancer campaign, to raise awareness amongst fans of the signs of bladder and kidney cancer."

“Blood in pee can be a symptom of bladder or kidney cancer so it is vital that you visit your GP as soon as possible if you notice it. It’s so easy to brush health niggles under the carpet but finding cancer early makes it more treatable - that’s why we’re committed to raising awareness of the symptoms and helping to tackle cancer head on.”

“We welcome the move for Southampton football club to be supporting the ‘Blood in Pee’ campaign. It’s important for the signs and symptoms of bladder and kidney cancer to be out there and understood. This campaign, which identifies a key symptom – blood in pee – is a great example of how we can raise symptom awareness.”

Professor Kevin Fenton, National Director of Health and Wellbeing at Public Health England, thanks Southampton FC for their involvement:

“We’re delighted to receive such high profile support from the club and are confident that together we can increase awareness of the symptoms of bladder and kidney cancers.”

For further information about the signs and symptoms of bladder and kidney cancers, please visit nhs.uk/bloodinpee