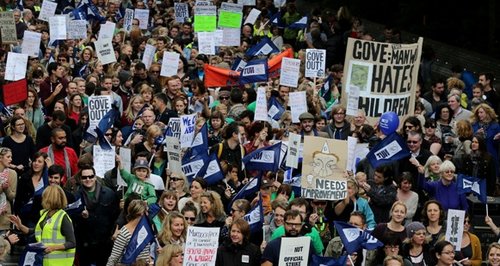 Teachers across the South Coast are on strike today (Wednesday 26 March) in a row over pay, pension changes and workload.

Dozens of schools across Hampshire, the Isle of Wight and West Sussex are closed or partially closed as members of the National Union of Teachers (NUT) walk out. (Scroll down for a full list in your area.)

Marches and rallies will be held on the day, including:

- Portsmouth, 12pm, by the fountain near Debenhams, Commercial Road

The NUT says the action is being taken against excessive workload and bureaucracy, performance related pay and in defence of a national pay scale system and unfair pension changes.

“Teachers deeply regret the disruption caused by this strike action to parents and teachers. The Government’s refusal, however, to engage to resolve the dispute means that we have no alternative other than to demonstrate the seriousness of our concerns.

“Destroying the national pay framework means that in every school head teachers and governors have to worry about developing a pay system instead of focussing on teaching and learning. The Government’s performance related pay is unnecessary and will build unfairness and additional bureaucracy. Further, international evidence shows that performance related paydoes not work for schools.

“Teachers do not believe that they can work to the age of 68 or even later for a full pension – and they don’t believe it is educationally desirable either. The NUT recognises that other workers are having their pensions squeezed. We believe that this is wrong too – everyone should be entitled to a decent standard of living in retirement.

“Michael Gove can resolve this situation by listening to our concerns and doing something about them. Our concerns are not just for teachers but for the future standard and provision of education”.

The government says it has agreed to further talks.

You can find information about all school closures through the following local council websites: