A motorcyclist riding without a registration plate gave a speed camera the finger as he tore through a 30mph zone because he thought he would not be caught.

Paul Collins was riding his bike, which had no front plate, at 48mph in a 30mph zone in Southampton when he made the gesture.

But his actions gave police a clear view of him and his JinLun Lexmoto125cc motorcycle and he was later spotted on the same road.

Collins, 26, from Hillson Drive in Fareham pleaded guilty at Southampton Magistrates' Court to speeding on October 5 last year and received five points on his licence and was fined a total of £177.

"When we visited him at home, the rider admitted the offence, telling us his mates told him he wouldn't get caught.

"I think this is a lesson to all irresponsible motorcyclists that we will seek to prosecute anyone caught speeding through these areas.

"Collins did so knowingly and his arrogance was plain to see from the enforcement image.

"I hope the sentence will encourage other riders to be more responsible.'' 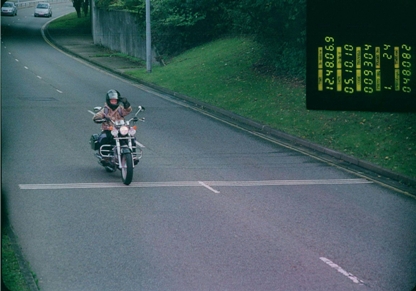