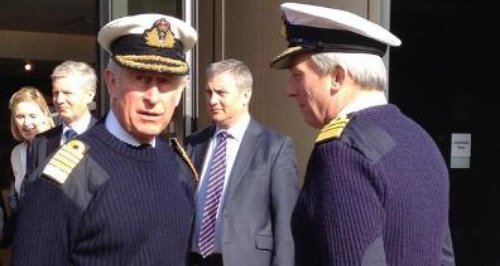 The Prince of Wales has toured the new Mary Rose Museum in Portsmouth, nearly 40 years since he first dived on the wreck site.

Prince Charles recalled his days of diving in the "lentil soup'' of the Solent at the Mary Rose wreck site as he visited the new £35 million museum housing the remains of the Tudor warship.

Charles, who is president of the Mary Rose Trust, was accompanied by the Duchess of Cornwall during his visit to the purpose-built museum at Portsmouth Historic Dockyard. 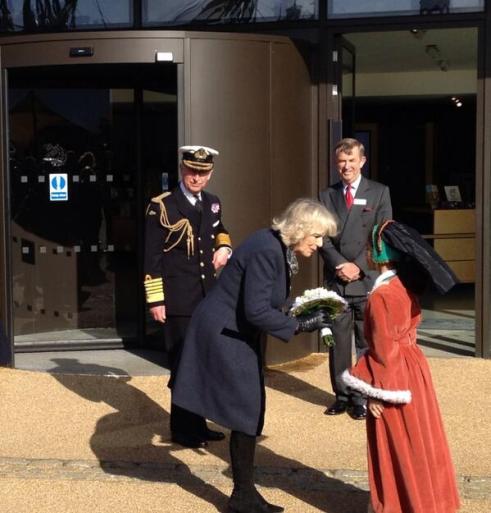 The centre opened last year re-uniting the hull with thousands of artefacts for the first time since they were lifted from the seabed in 1982.

Charles has been actively involved with the flagship of Henry VIII's navy since his first dive on the wreck on 30 July 1974, and has followed the project ever since.

He was one of the last people to dive down to the Mary Rose wreck in 1982, before watching the hull being raised from the site just outside Portsmouth Harbour where it was sunk in battle in 1545.

During his visit, Charles had a chance to handle some of the artefacts as well as have a go with a replica longbow.

He said afterwards: "I don't want to put my shoulder out.'' 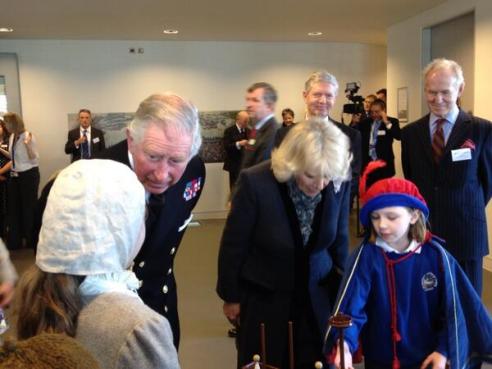 He also met pupils of St John's Cathedral Primary School and St Swithun's Catholic Primary School in Portsmouth who were learning in the Stavros Niarchos Learning Suite about the use of ballast to prevent ships from keeling over as the Mary Rose did.

Catherine Hobbs, executive headteacher of both schools, told the prince that she heard an interview on the radio of him talking about diving on the wreck site from 40 years ago, to which he replied: "Oh gosh, that's a bit worrying.''

In a speech to fundraisers and volunteers, Charles spoke of his time diving with archaeologists on the wreck site just outside Portsmouth Harbour. He said:

"I remember my days of diving on the ship out in the Solent in the most impossible conditions, it was like swimming in a kind of lentil soup, you couldn't see anything, or so I thought, until it was under your nose.

"What I could never get over was the sheer expertise of the archaeologists operating under water.''

He also described the day when the wreck was lifted from the seabed using a crane that was on loan for only the one day.

He explained that he encouraged the crew to get on with the job despite technical difficulties including poor weather.

He continued: "I will never forget the almighty crash as the chains came down and I thought it was all my fault.''

"I think it was worth taking the risk as we have this truly remarkable example of a Tudor warship which is unique.''

As they left the museum, Camilla took the opportunity in the gift shop to buy a cuddly toy of the ship's dog Hatch, a skeleton of which is on display in the museum, and some children's colouring books. 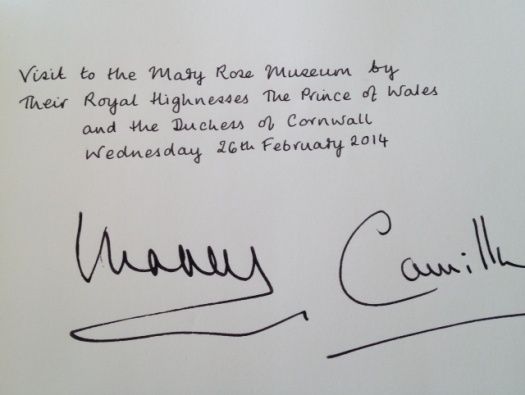 Outside the museum, the couple greeted schoolchildren who had gathered outside and along the deck of HMS Victory and Charles spoke to some of the youngsters in French asking them if they had enjoyed visiting the ships.

Charles, who was wearing his naval uniform, went on to visit HMS Dragon at sea, taken by Merlin helicopter from the flightdeck of HMS Illustrious.

During the two-hour visit to the Type 45 destroyer, one of the navy's newest and most advanced warships, Charles was briefed on the highlights of its recent deployment for counter-piracy operations and maritime security in the Gulf.

Dragon's commanding officer Captain Iain Lower said: "It was an honour for His Royal Highness the Prince of Wales to visit HMS Dragon. As the Royal Navy's 'Welsh' ship, the whole of the ship's company enjoy a particularly strong bond with the city of Cardiff and the Welsh connection is something we are all very proud.''

Camilla went to visit the Treetops Sexual Assault Referral Centre in Portsmouth, where she met staff and volunteers and praised the work carried out there.

She then went on to HMS Illustrious where, in her role as commodore-in-chief Royal Naval Medical Services, she was given a tour of the helicopter carrier's sickbay while a casualty treatment exercise was under way.

While chatting to the medics, the pretend-patient opened his eyes, prompting Camilla to say: "Oh, he's woken up, the anaesthetic has worn off. Seems like a good idea to be put to sleep for the afternoon.''

The ship's crew and medics were involved in distributing aid as part of the disaster relief effort in the Philippines in the wake of Typhoon Haiyan.

Surgeon Commander Jonathan Read, from London, said the crew prepared and shifted 300 tonnes of aid by hand as part of the effort.

He said: "Many of us were used to working in heat but it was the humidity that got to us, but we were just happy to do our bit.''

The 23,000-tonne ship extended its deployment over Christmas in order to assist the aid effort.

Camilla was then joined by Charles at a reception in the wardroom for 30 crew members' families and NHS medics who joined the ship for three weeks for the relief operation in the Philippines.