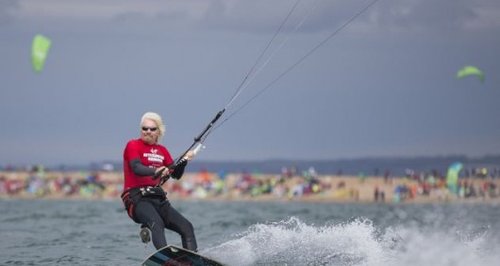 Sir Richard and The Virgin Kitesurf Armada of 318 kitesurfers set a new World Record on Hayling Island for the largest number of kitesurfers to complete a one-mile course, and raised money for a collection of charities, Virgin Unite, Snow-Camp and The RNLI.

The Armada set off from Hayling Island beach. After the one-mile record-breaking mark most of the participants then kitesurfed further down the coast on a 46 mile journey towards Lancing, stopping off at Pagham and Littlehampton until the Kitesurf Armada’s official finish line in Lancing.

Sir Richard Branson, who in 2012 achieved the Guinness World Record for the oldest person to cross the English Channel, has added another record to his eclectic collection.

All donations for the Virgin Kitesurfing Armada will go to three fantastic charities – Virgin Unite, Snow-Camp and the RNLI. The Virgin Kitesurfing Armada marks the beginning of a five year partnership with Virgin and the youth charity Snow Camp – an innovative charity that uses a unique combination of skiing, snowboarding and life-skills programmes to support inner-city young people.

"318 of us took to the water from Hayling Island in the first event of its kind for this fantastic sport. It was a real spectacle.

"Having broken the world record for the oldest person to kite surf across the Channel last year, and been no stranger to world record attempts over the years, it was wonderful to break another record as part of such a brilliant team.
"We arrived in Hayling Island in picturesque conditions, a sunny morning rising out of the fog before the wind picked up at just the right time for us to begin kitesurfing. It goes to show luck plays a big role in any adventure like this.

"The team spirit was summed up by kitesurfers of all abilities getting involved - from a guy dressed up as yours truly with a blow-up doll on his back, to four-time kite race world champion Steph Bridge, the current men’s kite race European Champion and youth world champion, Olly Bridge and four-time British kite champion Lewis Crathern. It was a real team effort from everyone.

"My mum Eve, who is enjoying her 90th year, was on the beach cheering us on. Having been on plenty of adventures herself, it was lovely to share another exciting challenge with her today. She also has an Honorary President role with the RNLI - one of three wonderful charities all donations are going to support, alongside Virgin Unite and youth charity Snow-Camp.

"We set a world record with our first attempt, and have signed a five year partnership with Snow-Camp. We will return next year and plan to build a weekend kitesurfing festival together. Who knows what records we could break in 2014!"