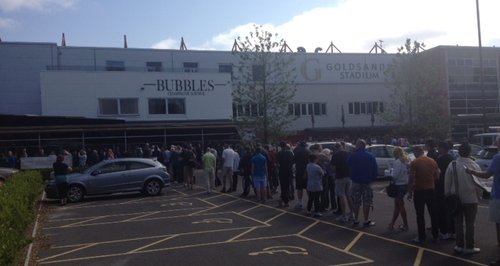 Football fans have queued overnight to get their hands on tickets to see world class players, like Ronaldo and Kaka, on the South Coast.

AFC Bournemouth are hosting Spanish giants Real Madrid on Sunday 21 July in a friendly match at the Goldsands Stadium.

More than 4,000 tickets went on general sale at 9am, after the first were made available to season ticket holders on Monday 8 July. They're also being sold at the Bournemouth International Centre and Pavilion.

The club's hoping to have a temporary stand ready in time for the game - to increase their capacity to more than 12,000.

They've told us they expect the tickets to sell out in record time, possible within hours.

First in the line was Bournemouth local and Cherries fan Jordan Carter. He says he got there at 5.45pm on Wednesday:

"We ordered a takeaway and got it delivered there.

"We brought seats out and blankets. It's been a great atmosphere with loads of people, everyone talking. It's been a good evening and a great experience. It all started getting busy at 4 o'clock this morning."

"It's a once in a lifetime experience and it's never going to happen again to a club like Bournemouth."