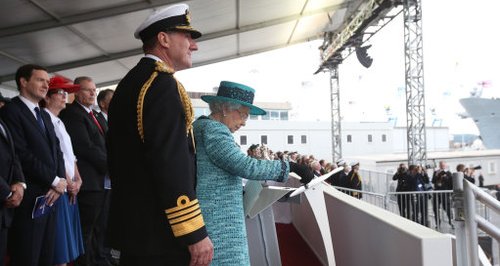 The largest warship ever built in the UK has been officially named at a ceremony attended by the Queen, Prime Minister David Cameron and First Minister Alex Salmond.

The 65,000-tonne Royal Navy aircraft carrier HMS Queen Elizabeth was formally christened during an event at the Rosyth Dockyard in Fife, where the ship was assembled and fitted out.

The warship was partly built in Portsmouth and will be based in the South Coast city when she's formally handed over to the Royal Navy in 2017.

Schoolchildren and workers from BAE Systems gathered in Portsmouth Historic Dockyard to watch the ceremony on a big screen. 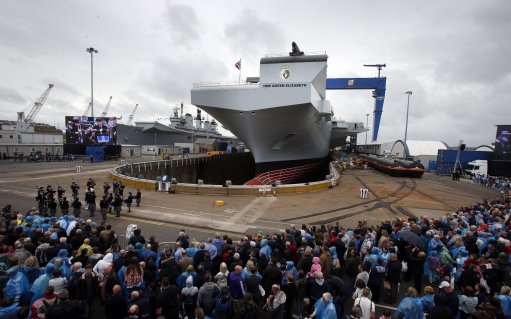 The Queen, who was accompanied by the Duke of Edinburgh, oversaw the traditional naming ceremony by pressing a button to release a bottle of Islay malt whisky - suspended at the front of the ship - to smash on to the hull.

In Scotland, about 3,500 people involved in the design and construction of the carrier watched the celebrations, alongside dignitaries and politicians including First Sea Lord Admiral Sir George Zambellas, Labour leader Ed Miliband and Defence Secretary Philip Hammond.

The RAF's Red Arrows performed a fly-past during the event, painting the sky over the Forth red, white and blue. 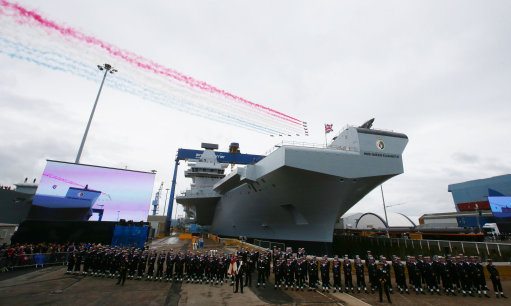 The fly-past was followed by a procession of three generations of Royal Navy aircraft, including a historic 1950s de Havilland Sea Vixen fighter - the last and only flying aircraft of its kind in the world.

Aircraft Carrier Alliance managing director Ian Booth, the man overseeing the construction of the ship, said: ``This is a historic occasion for our country and a proud moment for more than 10,000 people across the UK who have worked together to deliver HMS Queen Elizabeth.

``This is an engineering challenge of unprecedented scale and complexity for UK shipbuilding and I want to congratulate everyone involved in making today possible.

``The ship truly reflects the very best of British design and ingenuity and we all feel an enormous honour to see Her Majesty name her today.''

The naming ceremony, a naval tradition dating back thousands of years, marked the first time in more than 15 years that the Queen has christened a Royal Navy warship.

The ship and a second vessel, the under-construction HMS Prince of Wales, are the largest warships ever built for the Royal Navy.

The two ships are known as Queen Elizabeth Class aircraft carriers and are being built by the Aircraft Carrier Alliance (ACA), a partnership of BAE Systems, Babcock, Thales and the Ministry of Defence.

Overall, six shipyards around the UK - Appledore, Birkenhead, Govan, Portsmouth, Rosyth and Tyne - have been involved in building various parts of the carriers.

Celebrations were held at 15 sites across the UK to mark the moment, with the events in Rosyth relayed live on giant screens, and landmarks including Edinburgh Castle were lit up in royal blue.

Those behind the project, which cost an estimated £6.2 billion overall, say the QE Class will be the centrepiece of Britain's naval capability.

Each of the carriers will provide the armed forces with a four-acre military operating base, which can be deployed worldwide, operating the F-35 Lightning II and a number of types of helicopter.

The warships are said to be versatile enough to be used across the full spectrum of military activity, from war fighting to providing humanitarian aid and disaster relief.

The length of each ship is the equivalent of 28 London buses - almost three times the length of Buckingham Palace.

Each of the ships, which have a life expectancy of around 50 years, will be fitted out with more than three million metres of cable and will have enough power to light up a small town.

The naming ceremony marked the structural completion of HMS Queen Elizabeth, which will be floated out of her dock for the first time later this month.

The carrier will have 679 permanent crew and capacity for 1,600 crew members when fully operational.

There has only been one previous HMS Queen Elizabeth, which was completed 100 years earlier.