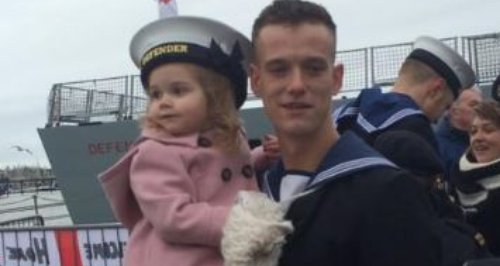 A Portsmouth warship, which helped support US air strikes on Islamic State targets in the Gulf, has been welcomed home in time for Christmas.

Families cheered their loved ones as HMS Defender sailed into Portsmouth Naval Base this morning (Friday 12 December) following a six-month deployment to the northern Gulf, during which it used its air defence capabilities to back the US-led carrier task group as it carried out strikes on the Syrian insurgency.

Children and families waved flags and banners to welcome home the sailors for Christmas as they ran down the gangplank. The festive atmosphere was added to with carols sung by the Portsmouth Military Wives Choir and the band of Her Majesty's Royal Marines Portsmouth. 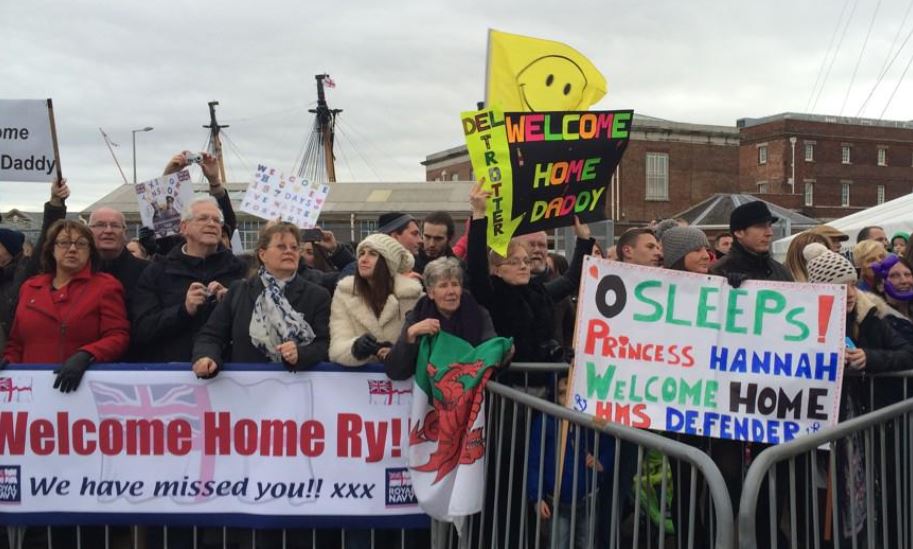 Although it was the ship's maiden deployment, the destroyer and its crew were at sea last Christmas after it was ordered to set sail at the last moment to escort a Russian warship sailing off the coast of Scotland.

``The homecoming is a day for my ship's company to be extremely proud of their achievements and the delivery of a hugely successful maiden operational deployment.

``Some have been with Defender from build and have seen the ship grow from an engineering project to become one of the world's most capable air defenders deployed on operations.

``Today is a special day and one to recognise the support of our families and friends who play an enormous part in everything we do. Without them these continued successes would not have been possible.''

The 28-year-old said he was glad to be back on firm ground after severe weather meant a rocky final night at sea.

``We were welcomed home by the weather bomb, it was terrible, the mess was falling to pieces last night, everything falling off the bunks, I woke up at midnight and haven't slept since then.

Able Seaman (Electronic Warfare) Josh Tetaur, 28, from Clacton-on-Sea, Essex, was met by his niece Freya, three, and his family.

``I'm just looking forward to being with the family.''

Warrant Officer Steven Turnbull, 42, from Portsmouth, was reunited with his eight-week old son Parker. He had flown back earlier in the deployment to be with his wife Sarah, 40, for the birth.

Mrs Turnbull said: ``It's wonderful, absolutely lovely to have him here for Christmas.''

Leading Writer Rhian Killpatrick, who received a commendation for her ``dedication and commitment'' to organising morale-boosting activities, said she was excited to be reunited with her husband and daughter.

``Having spent last Christmas at sea and over six months deployed in the Gulf, we are all hugely looking forward to returning home to our loved ones.

``The ship has achieved an incredible amount during the last 12 months and playing a part in this maiden deployment has been an exciting time.''

The first sailor to come down the gangplank was Leading Communications Technician Craig Jacobs, who paid #200 in an on-board raffle raising money for the ship's charities to have the privilege of being the first to disembark.

Defender's maiden deployment included counter piracy patrols in the Gulf and operations in the Mediterranean, but its main focus was providing direct support to the US aircraft carriers USS G H W Bush and USS Carl Vinson.

During the deployment the ship clocked up more than 35,000 nautical miles while visiting the majority of the Gulf States, including Oman, Qatar, the UAE and Bahrain, and took part in a major exercise with US and Kuwaiti forces.

Defender will now enter a maintenance period in the new year.